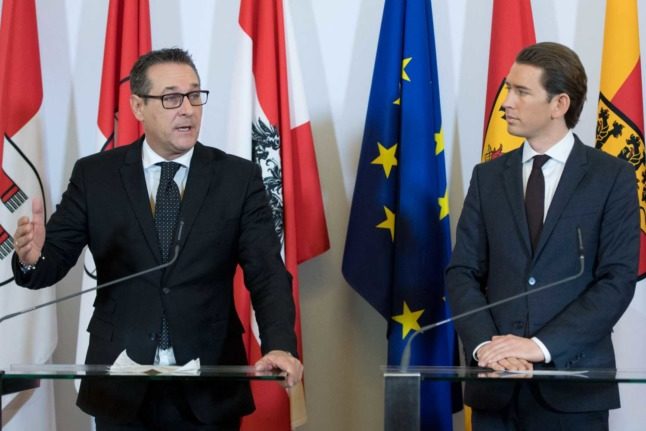 A set of messages detailing secret agreements between the ruling conservative People’s Party (ÖVP) and their former and current coalition partners have caused further embarrassment for the government, which has barely recovered from the scandals that forced former chancellor Sebastian Kurz out of his job.

Two letters have been made public: on Friday, the secret deal between the ÖVP and far-right Freedom Party (FPÖ), signed by Kurz and disgraced former FPÖ leader Heinz-Christian Strache was published.

Then the undisclosed agreement with current coalition partner, the Green Party, was published.

These are called Sideletters in German, which is related to the English legal term ‘side letters’ because they’re a set of agreements ‘on the side’ of the official coalition deal.

They were never intended to be made public.

What was included in the secret agreements?

The first agreement, with the far-right FPÖ, went into some detail about future appointees to senior roles in institutions including the judiciary, national bank, EU, and public service media, explaining which appointments would go to FPÖ-backed candidates and which to people proposed by the ÖVP.

In some cases, specific names were given.

In the second agreement, with current partner the Greens, one of the most notable points was that a ban on headscarves for teachers was agreed, a policy aimed at prohibiting Islamic headwear.

This agreement also included some notes on which party had the right to certain political appointments, though no names were given. This deal included a line stating that all appointments should be made based on “competence and qualifications”, an addition missing from the other agreement.

Is this kind of deal legal?

Yes, there is no evidence of criminal wrongdoing from the documents published so far.

Why has it caused trouble?

The scandalous part isn’t the existence of these agreements themselves — those would always be expected in politics.

In fact, politicians have acknowledged this, so it’s the specific content that has caused outrage in some political circles, now that the documents have come to light (the ÖVP-FPÖ one as part of an FPÖ politician’s testimony at the the economic and corruption prosecutor’s office, the ÖVP-Green one through a leak).

With regard to the candidates for senior roles, in some of the cases the government does have the power to make these appointments, and that naturally means that politics comes into it, but the meticulousness with which it’s laid out in the letters is what’s causing outrage, with specific names set out in the ÖVP-FPÖ letter.

One figure, Wolfgang Brandstetter, was a minister at the time of the agreement being drawn up, and the side letter set out a future role for him.

And some of the roles set out should be publicly advertised under Austrian law, or decided by a supervisory board. The liberal weekly Profil said the agreements demonstrated “cronyism in the purest form”.

“There are certainly some agreements that are OK, especially when it comes to political posts. But some parties went much further than this, e.g. when they dealt with posts in the ORF or institutions like the FMA or the ÖBAG,” political analyst Thomas Hofer told The Local.

There’s also the fact that some of the aspects that were agreed go against how the parties publicly present themselves.

The headscarf ban, for example, is not popular with many Green voters or politicians, though it was something that Kurz pushed for.

Speaking to public broadcaster ORF on Sunday, Kogler said that his party knew the ban would never have held up in court (a similar proposal to ban headscarves for schoolchildren was thrown out by the constitutional court) and pointed out that it never actually came to fruition because it was negotiated out of the official coalition agreement.

What does this mean for Austrian politics?

It’s a challenge for new Chancellor Karl Nehammer, at the very least. On Wednesday, he told the Kronen Zeitung that there would be no more secret deals of this kind and that future choices of candidates for political appointments would be made “publicly and transparently”.

Kogler has also said on Twitter that these deals should be a “thing of the past”, placing the blame squarely on the ÖVP by saying that “in the negotiations with Sebastian Kurz, full transparency with our counterpart was not possible”. He has called for the Freedom of Information Act and anti-corruption laws to be passed, which he argues would increase transparency.

Public trust in the government and state institutions is currently damaged from scandals in recent memory.

Perhaps the most notable was the notorious Ibiza-gate scandal, when a video surfaced in May 2019 in which Strache appeared to offer state contracts in exchange for campaign money.

In the video, secretly filmed on the Spanish island of Ibiza, Strache tells a woman posing as the niece of a Russian oligarch that the FPOe receives hundreds of thousands of euros in illicit funding and proposes a plot to turn Austria’s largest newspaper into an FPOe mouthpiece.

“For the public this is just adding on to a very bad impression people got in the last couple of years. Backroom deals are always a problem when they become public – but this is even more true when there were scandals like Ibiza before,” notes Hofer.

“The sideletters are in many ways different [from the Ibiza scandal]. What is similar is the impression that many people might take away, namely that politicians are dishonest and politics is a dirty business.”

And as well as the reaction from the public, there’s also the fact that Green Party leaders reportedly suspect the ÖVP of leaking their coalition deal to distract from other issues.

The leak is damaging to the reputation of the Greens, who campaign for political transparency. Even within the party, several MPs have openly criticised the inclusion of the headscarf ban in the deal, which apparently was not discussed within the party.

“For the ÖVP this means more trouble but certainly it is a bigger impact for the Greens, especially because they always stressed their transparent positioning,” explains Hofer.

“So for their core message and also concerning their party base and some negotiators it is hard to swallow that the leadership packed touchy issues like the headscarves into the sideletter without them knowing it. The Green Bundeskongress said yes to the coalition without knowing about the contents of the sideletter.”