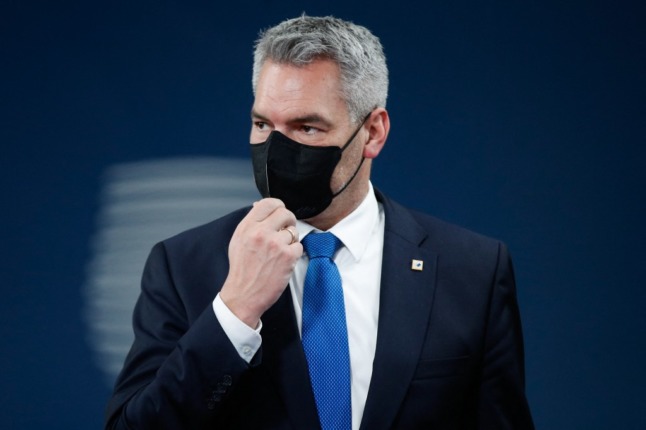 Catch up on the Chancellor's comments on the coming vaccine mandate and ongoing protests against Covid measures. Photo: Johanna Geron/Pool/AFP

The Austrian government presented its final draft of the vaccine mandate law on Sunday following intense discussions with opposition parties and experts over the weekend.

One change from earlier versions is that the jabs will only be mandatory for adults, after previous versions of the law applied to everyone aged over 14. Other key points are:

Read more about what the law contains here.

Once again, large protests took place over the weekend in multiple towns and cities across Austria, to protest both Austria’s Covid restrictions and the coming vaccine mandate.

While the protests have been mostly peaceful, police have warned of far-right extremist involvement.

Chancellor Karl Nehammer said on Austrian TV on Sunday evening that a total of 52 police officers have been injured during the demonstrations since they first began, something he said was “completely unacceptable”.

A prominent Austrian startup founder, Florian Gschwandtner, has apologised after sharing a video on Instagram of a rowdy party in an apres-ski bar in Kitzbühel, a Tyrol town with an incidence rate of over 3,000. Apres ski businesses are currently closed by law along with nightclubs, while a 10pm curfew applies to other restaurants and bars.

Asked about the video, Tourism Minister Elisabeth Köstinger said she had “absolutely no sympathy” with business owners who broke Austria’s current Covid rules, and noted that businesses which violate these rules are subject to repay any financial aid they reecived from the government during the pandemic. The Interior Ministry said the bar in the video was regularly checked and that an investigation into the video was underway, Die Presse reports.

Weather for this week

After a pleasant weekend across most of the country, Monday will bring strong winds to the west, with gusts of up to 100 km/h expected in Lower Austria and Vienna.

Lower lying areas can expect mild weather, with up to 10C in the Graz area for example, and further west there will be less rain and wind.

From Wednesday onwards, more snow can be expected, with stormy weather again on Thursday.