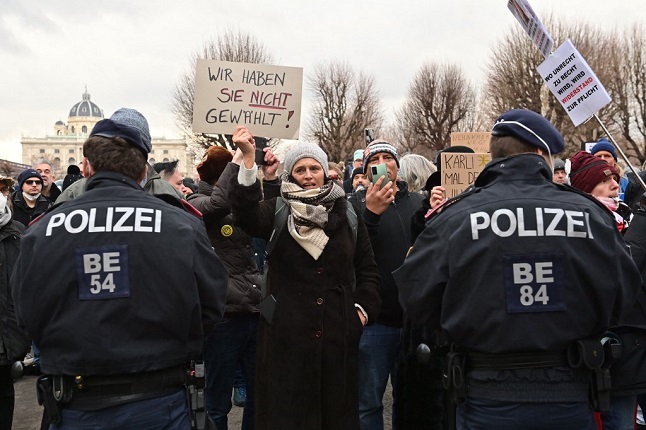 A woman holds a poster saying "we did not elect you" as anti-corona measures protestors demonstrate outside the Chancellery during the swearing-in yesterday of the new Chancellor. Photo: Joe Klamar/AFP

Update from Vienna on post-lockdown steps

We’re expecting an update from the capital region today, a day before national and regional leaders meet to discuss the plan for Austria as a whole.

Vienna has had stricter rules than Austria’s other regions for some time, including implementing a 2G+ rule (proof of vaccination or recovery plus a negative PCR test) for bars and clubs shortly before the national lockdown, though this was only in place for a weekend. This is likely to remain in place after the lockdown ends.

Vienna cannot independently decide to lift lockdown, as federal states only have the power to impose measures beyond the ones that apply nationally and not to opt out of national ones. So we’ll have to wait a bit longer for confirmation on exactly what will re-open on Sunday.

A parliamentarian from the far-right Freedom Party, Dagmar Belakowitsch, falsely stated in a speech at the protests that Austria’s hospitals are full not with Covid patients but with people requiring treatment as a result of the vaccine. Austria’s medical association has said this is false and appealed to the public to get information regarding Covid from public health authorities. Since the start of the pandemic, over 60,000 people in Austria have required hospital treatment for Covid-19, compared to 1,360 who have been treated in hospital or had a hospital stay extended close to the time of their vaccination. Intensive care stations are currently occupied by 654 patients receiving treatment for Covid-19 and 769 patients receiving care for other reasons.

By November 27th, there had been 270 applications made under the law which gives compensation for damage caused by Covid-19 vaccines (the majority of which are still pending, so it is not confirmed if the vaccine directly caused any harm), while over 13 million vaccine doses had been administered.

Speaking of misinformation, several thousand people have de-registered from digital health portal Elga, after rumours spread in anti-vaccine circles that this would help them avoid future fines under the vaccine mandate.

Speaking to broadcaster ORF, Elga’s managing director confirmed this is not the case as vaccination certificates are still recorded centrally, but it does mean losing access to things like getting a prescription over the phone.

We have a new chancellor

Austria’s new chancellor Karl Nehammer, a former soldier and communications advisor, was sworn in on Monday, along with several new cabinet members as the ruling People’s Party faces the fallout of a major corruption scandal.

Nehammer’s first act has been to conduct a cabinet reshuffle, sending his predecessor Alexander Schallenberg back to his previous post as foreign minister and appointing new finance, interior and education ministers. The new cabinet members were sworn in along with Nehammer.

Heavy snowfall across a lot of the country means a level 3 avalanche warning (on a five-point scale) is in place in Carinthia, Salzburg, Styria, Tyrol and Vorarlberg. Winter sports fans in particular should exercise caution in the mountains.

December 8th is the Feast of the Immaculate Conception, which is the conception of Mary, the mother of Jesus.

This means many employees have the day off work, and many shops and businesses are closed, but supermarkets are allowed to open between 10am and 6pm. Usually, the Billa and Penny Markt chains stay shut while Spar, Hofer and Lidl shops are open, sometimes with shorter hours than usual.

As for what we’re celebrating: Catholics believe Mary’s mother, Saint Anne, became pregnant in the usual, biological way, but that the conception was ‘immaculate’ because God intervened, absolving Mary of original sin.