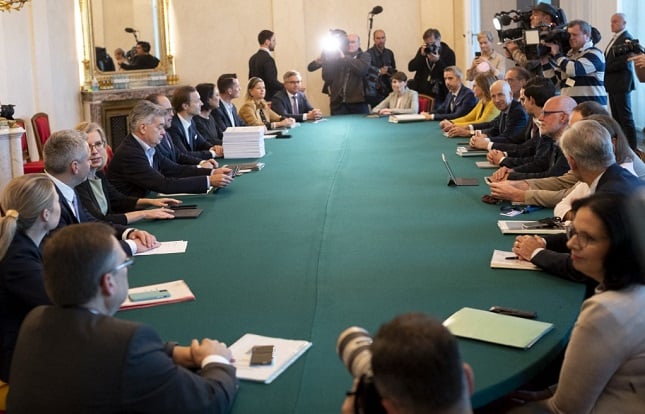 It's all change for the Austrian cabinet, pictured here in October after the last change of leadership. Photo: Joe Klamar/AFP

Nehammer will be sworn in on Monday at 1pm by Austrian President Alexander Van der Bellen as he takes over the role from Alexander Schallenberg, who was only in position for two months having stepped in after Sebastian Kurz quit the top job amid corruption allegations.

On Thursday, Kurz said he was leaving politics altogether, prompting Schallenberg to resign too. His justification was that “the posts of chancellor and head of the [ruling conservative People’s Party, ÖVP] party should quickly be taken on by the same person”.

Nehammer became deputy chairperson of the ÖVP in 2017 and the following year became the party’s migration and integration spokesperson, before taking over the Interior Ministry in January 2020.

He has taken a tough line on immigration, for example following the Taliban takeover of Afghanistan, he called for “deportation centres” in countries neighbouring Afghanistan to take in Afghans deported from Europe, and said that Austria should continue carrying out deportations to Afghanistan despite many countries pausing this in light of the security situation.

On Saturday, Nehammer said: “It’s important that we have an effective government quickly, one that can start work. We have a pandemic to fight and that needs all our strength.”

Who else is in and who’s out?

Kurz’s resignation was the first of several.

Schallenberg is returning to his former role as Foreign Minister, ousting former ambassador Michael Linhart who had only recently moved to Vienna to take up the position. It’s not yet clear what will happen to Linhart.

And Finance Minister Gernot Blümel quit both his ministerial position and his other role as head of the ÖVP in Vienna, and has been replaced by Magnus Brunner, formerly a State Secretary, as Finance Minister.

Education Minister Heinz Faßmann has also left his post (the extent to which this was voluntary isn’t clear), to be replaced by the former rector of the University of Graz, Martin Polaschek.

Taking over Nehammer’s post in the Interior Ministry meanwhile is Gerhard Karner, a prominent figure from the Lower Austrian regional council.

Claudia Plakolm, a 26-year-old in Kurz’s old job as head of the ÖVP youth wing, joins the government as a State Secretary.

Bernhard Bonelli, Chief of Staff in the Federal Chancellory, was able to hold on to his position after Kurz’s departure, but is now likely to be succeeded by his deputy Markus Gstöttner, while Vera Regensburger was expected to become acting Chief, Standard reported. However, this had not been confirmed by the Chancellor’s office.

Why the mass resignation?

Both Kurz and Blümel, who are close political allies, gave two reasons for quitting their roles: the recent births of their children (Kurz’s first and Blümel’s second child) and the impact of ongoing corruption allegations.

Most observers believe the latter is the more significant factor, with Kurz saying he felt “hunted” and Blümel referring to death threats his family has received, and there is also speculation in Austrian media that Kurz may be leaving for a job in the private sector.

The former Finance Minister was one of the most high-profile targets in the Ibizagate scandal and had his home raided in February 2021 over alleged donations from a gambling company to the ÖVP.

And Kurz is suspected of involvement in corruption linked to his party allegedly using taxpayers money to pay pollsters and media figures in return for positive media coverage.

READ ALSO: Who’s who? The key players in Austrian politics

Why all this chopping and changing in general?

As we mentioned, Nehammer becomes Austria’s sixth chancellor in five years, and on top of that, you need to remember Sebastian Kurz had two stints in the role as head of two different coalition governments.

Like many European political systems, the proportional representation system makes it unlikely for a single party to win a straight majority in Austria.

In post-war Austria, the political landscape has mostly been dominated by the centre-left SPÖ and conservative ÖVP, either governing alone, in a grand coalition, or since the 1980s occasionally in coalition with the far-right FPÖ (which, around this time, changed its strategy to position itself a populist anti-establishment party).

Since the late 20th century, support of the two major parties has dwindled, giving more influence to the FPÖ (today the third largest parties and one of Europe’s most successful populist parties on the right), the Greens, and the youngest party NEOS, and making more political constellations possible.

Austrian politics has also been rocked over the past few years with some fairly significant corruption scandals, including the two that implicated Kurz and Blümel.

What next for Austrian politics?

Alongside managing the pandemic, a key priority for the new leader will be the ÖVP’s current coalition with the Green Party, which has been troubled.

The relationship was troubled not least due to the parties’ differing views on migration, and the Greens eventually forced Kurz’s exit from the Chancellor role by threatening to quit the coalition.

On a party level, the new Chancellor and ÖVP boss will need to recover the party’s reputation in the wake of the corruption scandals.

The next general election in Austria is currently scheduled for 2024, but that depends on the coalition surviving that long.

The EU home affairs commissioner Ylva Johansson, speaking after a meeting of European interior ministers, said she welcomed what she saw as new momentum on the issue.

In a reflection of the deep-rooted divisions on the issue, France’s Interior Minister Gérald Darmanin – whose country holds the rotating EU presidency – said the process would be “gradual”, and welcomed what he said was unanimous backing.

EU countries backed a proposal from French President Emmanuel Macron to create a council guiding policy in the Schengen area, the passport-free zone used by most EU countries and some affiliated nations such as Switzerland and Norway.

Speaking before the meeting, Macron said the “Schengen Council” would evaluate how the area was working but would also take joint decisions and facilitate coordination in times of crisis.

“This council can become the face of a strong, protective Europe that is comfortable with controlling its borders and therefore its destiny,” he said.

The first meeting is scheduled to take place on March 3rd in Brussels.

A statement released after the meeting said: “On this occasion, they will establish a set of indicators allowing for real time evaluation of the situation at our borders, and, with an aim to be able to respond to any difficulty, will continue their discussions on implementing new tools for solidarity at the external borders.”

The statement also confirmed EU countries agreed to take a step-by-step approach on plans for reforming the EU’s asylum rules.

“The ministers also discussed the issues of asylum and immigration,” it read.

“They expressed their support for the phased approach, step by step, put forward by the French Presidency to make headway on these complex negotiations.

“On this basis, the Council will work over the coming weeks to define a first step of the reform of the European immigration and asylum system, which will fully respect the balance between the requirements of responsibility and solidarity.”

A planned overhaul of EU migration policy has so far foundered on the refusal of countries such as the Czech Republic, Hungary, Poland and Slovakia to accept a sharing out of asylum-seekers across the bloc.

That forces countries on the EU’s outer southern rim – Italy, Greece, Malta and Spain – to take responsibility for handling irregular migrants, many of whom are intent on making their way to Europe’s wealthier northern nations.

France is pushing for member states to commit to reinforcing the EU’s external borders by recording the details of every foreign arrival and improving vetting procedures.

It also wants recalcitrant EU countries to financially help out the ones on the frontline of migration flows if they do not take in asylum-seekers themselves.

Johansson was critical of the fact that, last year, “45,000 irregular arrivals” were not entered into the common Eurodac database containing the fingerprints of migrants and asylum-seekers.

Earlier, German Interior Minister Nancy Faeser suggested her country, France and others could form a “coalition of the willing” to take in asylum-seekers even if no bloc-wide agreement was struck to share them across member states.

She noted that Macron spoke of a dozen countries in that grouping, but added that was probably “very optimistic”.

But he cautioned that “we cannot let a few countries do their EU duty… while others look away”.

France is now working on reconciling positions with the aim of presenting propositions at a March 3rd meeting on European affairs.