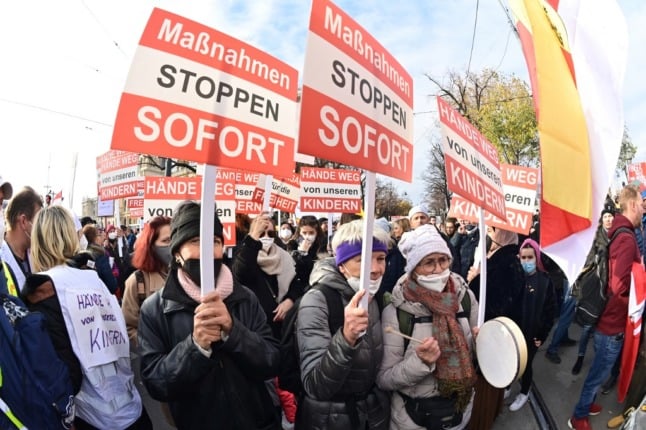 Riots took place in the early afternoon in Vienna on Saturday, as protestors set off smoke bombs and threw bottles and cans at the police.

In total, over 1,300 officers and some police dogs have been deployed, both from Vienna and the provinces, in response to those demonstrating against the nationwide lockdown due to come into force on Monday.

Some 40,000 people came out to protest in Austria.

The Austrian government on Friday announced that the country will go into its fourth lockdown and will make Covid-19 vaccines compulsory, as leaders again pleaded with the public to get vaccinated.

Since the announcement, thousands gathered at a rally held by Austria’s far-right Freedom Party FPÖ, waving Austrian flags and signs that argued for an end to the measures. Several demonstrators were restrained by police officers.

“It’s not normal that the government deprives us of our rights,” said 42-year-old teacher Katarina Gierscher, who travelled for six hours to attend the rally.

Some protesters wore a yellow star reading the words “not vaccinated”, in a nod to the Star of David many Jews were forced to wear during the Nazi era.

Austria’s Interior Minister Karl Nehammer expressed his outrage, saying in a statement that it “insults the millions of victims of the Nazi dictatorship and their families”.

Some have shared videos of the protest on social media, describing the new restrictions and future compulsory vaccination as a ‘Corona dictatorship’, while claiming that people want their freedom.

At protests with more than 50 participants, everyone must wear an FFP2 mask, unless all participants have a 2G certificate.

Under the lockdown rules, people aged over 12 without proof of 2G (full vaccination or recovery, or a first vaccine dose plus a negative PCR test) may not leave their homes except for essential reasons such as work or buying food.

Many of the demonstrators were reportedly not wearing a mask, but officials have been making identity checks throughout the afternoon.

READ ALSO: ‘Unavoidable’: How Austria has reacted to the new nationwide lockdown

Citizens were warned of temporary traffic disruption and road closures, while people were advised there could be restrictions to the public transport system.

Austria’s nationwide general lockdown will start on Monday and will be reviewed after the first ten days. It will last for “a maximum” of 20 days for vaccinated people. This means it will end on December 13th if no further changes are made.

However, the lockdown for unvaccinated people is set to continue after the end of the general lockdown if judged necessary.

Schools will remain open during the lockdown, although children are advised to stay home wherever possible.

Shops and restaurants will be forced to close, while working from home will be mandatory in any job where it is possible to do so.

Other new rules include the mandatory wearing of FFP2 masks in all enclosed rooms. Anyone found breaking the rules will face fines.

Everyone in Austria will need to be vaccinated from February 1st onwards, the government has also announced.

The new measures were announced after Austria recorded another all-time high for new daily cases on Thursday, with 15,145 cases reported in 24 hours. 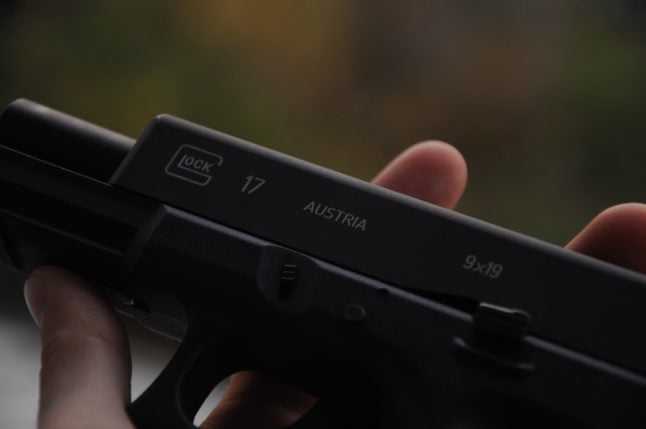 CRIME
EXPLAINED: What rules does Austria have on gun ownership?

As the debate on gun ownership laws is brought back into the headlines after a tragic mass shooting in the United States on May 24th, it might be surprising to read that tranquil and peaceful Austria is also one of Europe’s most permissive countries regarding gun laws.

To own a gun, it is necessary to have a proper license.

Who can have a license in Austria?

Licenses are self-paid, expensive and only issued to people who can prove a “genuine reason” (that includes hunting, collection, personal protection, and target shooting).

Additionally, people need to be at least 18 years old or 21 years for certain types of weapons.

Third-country nationals residing illegally and asylum seekers are not allowed to buy, possess, or hold weapons and ammunition in the Austria.

Gun owners need to undergo background checks that consider criminal and mental health records. There is also a limit to the number of firearms and ammunition that a person can have.

READ ALSO: EXPLAINED: Why is gun ownership in Austria on the rise?

People also need specific permits if they intend on carrying a firearm in public or openly.

Are there restrictions on firearms and ammunition?

Civilians are not allowed to own certain types of automatic firearms.

In addition, they cannot have any guns disguised as other objects or armour-piercing, incendiary and expanding ammunition.

How armed are Austrian citizens?

According to the Small Arms Survey, a Geneva-based research group, Austria is the 12th most armed country globally, with around 30 guns per 100 people, similar to Lebanon, Bosnia and Iceland.

According to the Ministry of the Interior, 1.16 million firearms are currently registered in Austria.

Experts believe more than one million illegal guns could also be in the country, possibly because of Austria’s close links to the Balkans.

According to the Chairman of the German arms lobby association, David Schiller, after the military conflicts there ended in the 1990s, many weapons found their way across the border.

How safe is Austria?

While about 250 people die in gun-related incidents a year, Austria is still a very safe country. With a homicide rate of 0.97 per 100,000 people, it has fewer murders than the UK, Denmark or Sweden when adjusted for population.

READ ALSO: ‘I don’t miss the guns’: How Americans feel about living in Austria

Those who enjoy going to shooting galleries or hunting with guns in Austria point out that gun licences are expensive, and a psychiatric evaluation is required before getting your hands on a weapon.