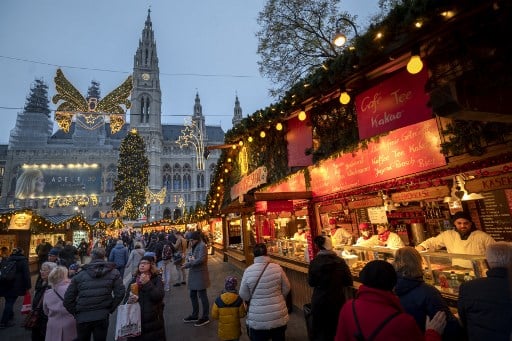 Visitors wait for hot drinks at the traditional annual Christmas Market outside of Vienna's city hall. Authorities began vaccinating children between 5 and 11 against coronavirus in the capital on November 15, 2021, among soaring rates that saw a country wide lockdown for some two million people who have not been fully vaccinated against Covid-19. JOE KLAMAR / AFP

“The developments in recent days, the huge increases at the vaccination centres, have shown that this threat scenario that we created with the… restrictions is having an effect,” Schallenberg said in a phone interview.

On Monday Austria became the first EU country to lockdown the unvaccinated in a bid to halt spiralling virus infection rates of around 12,000 per day in the country of 8.9 million.

The measure has been criticised as unenforceable and unlikely to bring contacts down to the necessary level, with vaccination sceptics also calling it discriminatory.

Official figures show a rise in the numbers of people in Austria coming forward for their first vaccination in recent days as the government announced progressively harsher restrictions for the unvaccinated.

Over the past seven days 128,813 people have received their first vaccine dose.

“As a government, we have not taken this step lightly to deprive a section of the population of its freedoms,” Schallenberg said.

But he rejected criticism that the lockdown for the unvaccinated was unfair.

He has thus far opposed any suggestion of tougher restrictions for vaccinated people.

“I want to persuade the unvaccinated to get vaccinated, not shut away the vaccinated,” he said.

With regard to vaccinating under-12s, Schallenberg said he expected a decision on the matter in “around two weeks” from the European Medicines Agency (EMA).

“Then of course I will also issue an appeal for children to get vaccinated,” he said.

Vienna city authorities have pre-empted the EMA’s approval and on Monday became the first EU region to start vaccinating children aged between five and 11.