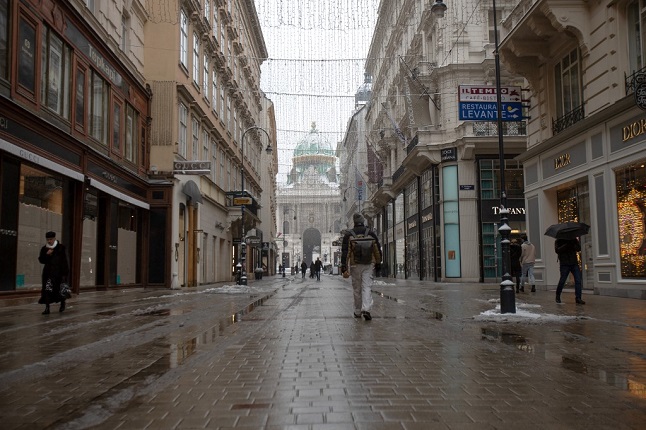 “Our aim is clear: we want on Sunday to give the green light for a nationwide lockdown for the unvaccinated,” Chancellor Alexander Schallenberg told a press conference. This would mean people without proof of 2G (full vaccination or recovery from Covid-19) would be unable to leave their homes except for essential reasons.

He described Austria’s vaccination rate — just 65 percent of the population is fully vaccinated against Covid-19 — as “shameful”.

A lockdown for the unvaccinated was proposed on Thursday by the governor of Upper Austria, the region with some of the highest Covid-19 incidence rates, pending legal approval from the government. Also on Thursday, Austria’s Corona Commission warned of a “serious threat to medical care” for the whole population and recommended that a lockdown for the unvaccinated should be introduced nationwide.

Whether the lockdown will apply in the whole country or only for the highest incidence regions will be decided after meetings with regional leaders over the weekend and likely announced on Sunday, but Schallenberg said he was in favour of “a nationwide solution”. Health Minister Wolfgang Mückstein confirmed the lockdown would apply at least in Upper Austria and Salzburg, the two highest incidence regions, from Monday, but it’s not clear if it could come into effect elsewhere from the same date.

Both regions had already announced tighter Covid restrictions this week in response to the severe strain on the healthcare sector, including extending the FFP2 mask mandate, banning the sale of alcohol at Christmas markets, and cancelling most large events over the next few weeks.

Vaccinations for children over five
Vienna Mayor Michael Ludwig said in a statement on Friday that the city authorities there would also be introducing extra measures in order to “keep in check… the dangerous development” of infection rates in the city.

Among these will be vaccinations for children between five and 11 as of Monday, making Vienna the first EU region to vaccinate children of this age.

The European Medicines Agency (EMA) has not yet issued an authorisation for any of the vaccines to be used for this age group but member states have the right to do so anyway to respond to a public health emergency.

In addition, Vienna residents will now be able to get a third booster vaccination only four months after their second dose, not six months as originally planned.

In order to attend events of more than 25 people or go to bars and restaurants in the city in the evening, not only will proof of vaccination or recovery be required but also the results of a PCR test no more than 48 hours old.

Random checks
People without proof of 2G (either full vaccination or a recent recovery from Covid-19) would only be allowed to leave their homes under certain circumstances, similar to previous lockdowns for the general population, such as work or essential shopping and exercise. Schallenberg reiterated previous statements that the government had no intention of bringing in another general lockdown.

One of the challenges of such a differentiated lockdown is how checks will be enforced.

Schallenberg addressed this in his comments on Friday, telling reporters: “We do not live in a police state. We cannot and do not want to check every street corner.”

He said that checks would be carried out at random, but appealed to people to follow the rules in order to protect their own and others’ health.

The announcement comes as Austria continues to report some of the highest Covid-19 incidence rates in Europe, with two of its nine regions’ seven-day incidence rates (new cases per 100,000 people) above the 1,000 mark.

ANALYSIS: Why are Covid cases in Austria rising and how worried should we be?

Also on Friday, Health Minister Wolfgang Mückstein announced he would order compulsory vaccination for health workers but did not specify when this would enter into force.

Mückstein said that availability in intensive care units in the hardest-hit areas was becoming “ever scarcer”.

Schallenberg said the government had been reluctant to consider the latest measure but justified it by saying: “The majority of the population, who have done the right thing, who have protected themselves — now we have to protect them too.”

“I don’t accept that the solidarity of the protected majority with the unprotected minority should go as far as a lockdown,” he said.

He called again on those who have not yet been vaccinated to get the jab.

Last week, the government had already said that only those vaccinated against or recovered from the virus would be allowed into restaurants, hotels and cultural venues.

Mückstein said on Friday that vaccination numbers had increased in the past few days.

Excluded from parts of society
In elections in Upper Austria in September a party set up specifically to oppose coronavirus restrictions won six percent of votes and a seat in the regional assembly.

People without either proof of vaccination against Covid-19 or recent recovery from the illness are already excluded from parts of society including, for example, events, restaurants, hotels and hairdressers as of Monday November 8th.

A lockdown would mean this group could not leave their homes other than for essential reasons such as going to work, supermarkets, or walking for exercise.

The lockdown will bring Austria to the fifth stage of its five-step Covid-19 restrictions plan, which was updated only three weeks ago to add two new levels. The fifth stage, a lockdown for the unvaccinated, was linked to the ICU occupancy rate exceeding 600 ICU beds (or 30 per cent occupancy).

Austria had 437 Covid-19 patients in its intensive care units, according to the most recent update from healthcare.

Austria has had three previous national lockdowns, while residents of Vienna, Lower Austria and Burgenland have been through four, but this is the first lockdown to affect only unvaccinated residents. In previous lockdowns, violations were punishable with fines of up to €1,450.

So far, more than 11,640 people infected with the coronavirus have died in Austria.

On Wednesday, the daily new case rate in the Alpine EU member of 8.9 million hit 11,398, the highest number recorded since the beginning of the pandemic.