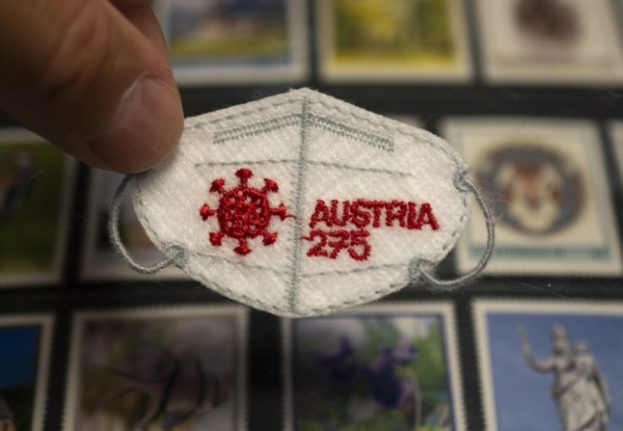 A special edition post stamp, in the shape of a face mask and made out of the same fabric, issued by Austrian Post dedicated to the novel coronavirus (Covid-19) period is pictured in Vienna on September 16th, 2021. Photo: JOE KLAMAR / AFP

Overview of the Covid-19 situation in Austria

As of October 22nd, the 7-day incidence rate (new infections per 100,000 people) was 212, while three regions were marked as ‘very high risk’: Upper Austria, Lower Austria and Salzburg.

A total of 26,490 people in Austria were currently positive for Covid-19 on October 22nd, with 968 people being treated for the disease in hospital.

Rules in place at the moment include an FFP2 mask mandate for everyone on public transport and in supermarkets and pharmacies, and proof of 3G (vaccination, recovery, or negative test) needed for entry to many businesses, with stricter rules in both Salzburg and Vienna. Find out about the rules in detail at the links below:

How does Austria compare to its neighbours? Lower Austria and Upper Austria have both been classed as ‘red’ or ‘very high risk’ as of Thursday, while Salzburg’s ‘red’ status was renewed.

Only Burgenland is now ‘yellow’ or medium risk, with the rest of the country classed as ‘orange’ or high risk.

Unlike in some European countries, the traffic light classification does not in itself have any impact on the measures in place in a region, but is intended as a signal to residents and local authorities.

New chancellor Alexander Schallenberg said on Thursday that he planned to meet with heads of the different regions and Health Minister Wolfgang Mückstein to discuss potential future measures to step up Austria’s sluggish vaccination rate.

The city of Vienna is expanding its Covid-19 testing options after Austria announced the introduction of a 3G requirement (proof of vaccination, recovery or a negative test) for workplaces starting from November. The Ernst Happel Stadium in the capital’s second district will offer both antigen and PCR tests and will be open 24 hours a day.

In order to take advantage of the facility, you will need to register with Stadt Wien and book an appointment, but this can be done at short notice.

As The Local has previously reported, the 3G workplace rule was only able to get the political support it needed after the government agreed to continue offering tests for free beyond the end of October.

From Saturday October 23rd, proof of 3G will be required to leave the town of Melk in Lower Austria after the seven-day incidence rate (new Covid-19 cases per 100,000 people) topped 600.

Meanwhile, the region of Salzburg requires proof of 2.5G (vaccination, recovery, or a negative PCR test) in order for residents or visitors to leave the municipalities of Adnet and Annaberg-Lungötz, starting from October 20th until at least November 3rd. This comes after the requirement was introduced for the town of St Koloman last week, initially until October 31st.

The mayor of Vienna announced on Thursday that the region would be extending its stricter Covid-19 restrictions, including FFP2 requirements in more places and a 2G (vaccination or recovery only, not negative tests) entry rule for evening dining and bars. The rules were originally set to expire on October 31st but will now apply further into the winter. Here’s our full news article on the extension of these rules.

Demand for fake vaccine certificates on the rise

The use of 3G entry rules means that doctors are experiencing an increase in request for the certificates to be falsely issued, national broadcaster ORF reports. One GP in the Carinthia region told the broadcaster he received around ten requests every month, but ORF notes there is no evidence yet that any such requests have been granted. This would be a criminal offence for both the doctor and patient.

In Vienna, more than 10 million at-home PCR tests have been used, called ‘Alles gurgelt’ (everyone gargles) — of which 0.49 percent returned a positive result. From November, the tests will also be rolled out in the Styria region.

Residents will need to download an app, then they can pick up the tests at pharmacies, carry out the test at home (including filming yourself gargling) and hand in the test to one of 460 drop-off points across the region including at pharmacies and Spar supermarkets. The results will be available within 24 hours.

Potential good news in the fight against Covid-19: Franco-Austrian biotech lab Valneva said that its Phase 3 clinical trials showed “positive” results. The French government has said that the European Union was still in negotiations to buy the vaccine, after the UK government terminated its own supply deal last month, which is so far the only order for Valneva.

We have started regular updates on the Covid-19 situation in Austria as part of our effort to keep Austria’s English-speaking population updated on the news you need to know. If you have questions or feedback, you can contact us at [email protected] or by submitting your question using the form below.

The winter season in Austria is a big driver of the country’s economy and has been hit hard by Covid-19 restrictions for the past two winters.

But this year the industry faces an even bigger crisis – a combination of rising inflation, concerns over energy supplies, staff shortages and the pandemic (because it’s not over yet).

We took a closer look to find out how these issues could impact the industry and what we could expect from this year’s winter season in Austria.

FOR MEMBERS: EXPLAINED: Why is Wien Energie asking for €6 billion from the Austrian government?

This means the industry is in a vulnerable position as energy prices rise, with some resort operators already confirming they will have to pass on some costs to customers.

Johann Roth, Managing Director at Präbichl in Styria, said that energy costs at the resort have tripled and admitted he is concerned about the coming winter season.

Roth told the Kronen Zeitung: “Of course we will have to increase the ticket prices, and to an extent that has never been seen in recent years.”

At Planai ski resort in Schladming, Styria, Director Georg Bliem said they aim to keep the day ticket price under €70, but has also set up an energy task force to find cost-saving measures for this year.

Suggestions for Planai include narrower slopes, reduced snowmaking capabilities, shorter cable car operating times and even a delayed start to the season.

Electricity costs at Planaibahn (the resort’s ski lift and gondola operator) were already at €3 million before the current energy crisis, according to the Kronen Zeitung.

Then there are hospitality businesses and hotels at ski resorts that are also being hit by rising costs.

As a result, the Kurier reports that room prices in overnight accommodation could increase by a further 15 percent in winter, and many people will no longer be able to afford skiing holidays. 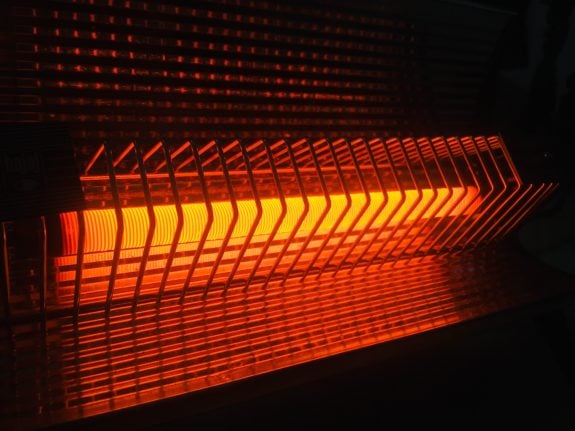 Rising prices are just one element of the energy crisis as there are fears that Austria will not have enough gas for the coming winter season – mostly due to the war in Ukraine.

In March, Austria activated the early warning system – which is the first level of a three-step emergency plan – for the country’s gas supply. If it reaches step three (emergency level), energy control measures will be put in place across the country.

FOR MEMBERS: When will Austria make the €500 anti-inflation payment and how do I get it?

How this would impact ski resorts is unknown, but at the emergency level, households, essential industries and infrastructure would be prioritised for energy.

So far, there is no indication that step two (alert level) will be activated and the European Aggregated Gas Storage Inventory recently confirmed that Austria’s gas storage capacity was 60 percent full.

However, Energy Minister Leonore Gewessler already appealed to businesses and households in July to start saving energy where possible.

Ever since Austria (and Europe) started opening up after Covid-19 lockdowns, the hospitality and tourism industries have been struggling to find staff.

In fact, shortly before the start of the summer season in Austria, there were 30,000 open job vacancies in the tourism sector. And the Wiener Zeitung recently reported on how restaurants in Vienna are struggling to keep up with customer demand due to staff shortages.

READ NEXT: ‘We need immigration’: Austrian minister insists foreign workers are the only solution

The issue is even being discussed in parliament and it has already been made easier for seasonal workers in Austria to access residency through changes to the Red-White-Red card.

Now, there are expectations of similar staff shortages for the winter season, which could cause further stress for ski resort operators.

Back in July, it was reported that the federal government was working on a Covid-19 contingency plan to get the country through another autumn and winter.

It envisages four scenarios – numbered from the best to the worst case. In the best case scenario, Austrians can live free of any pandemic rules. In the second best scenario, the situation will remain as it is (find out more about Austria’s latest Covid-19 rules here).

In scenario three, if new variants lead to more severe illness, the mask requirement will be expanded and more testing will be carried out.

READ MORE: REVEALED: The Covid-19 measures for the start of the Austrian school year

There could even be night-time curfews, entry tests and restrictions on private meetings. In addition, major events could be stopped from taking place and nightclubs closed.

From what we’ve seen over the past two winters, scenarios three and four would likely impact winter sports operations. But to what degree would depend on the severity of the situation.