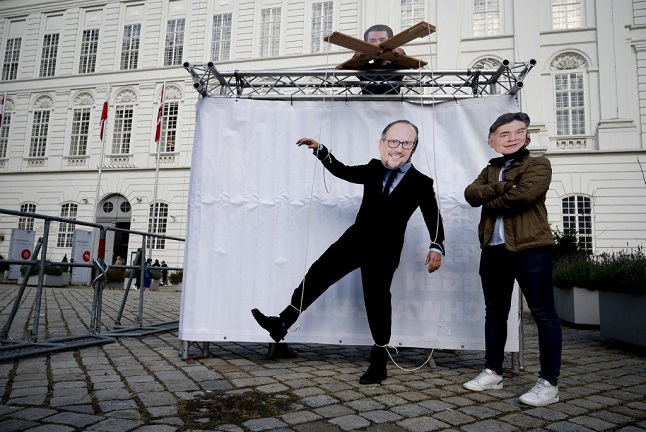 On Tuesday, Schallenberg gave his declaration of government, telling parliament: “As surprising as this new role is, I am determined to take it on.” There were no major surprises in his declaration, in which he vowed to continue working closely with his predecessor Kurz and to carry out the latter’s government programme.

But opposition parties were quick to argue that sticking too closely to Kurz’s plans could cause issues.

The new leader has a challenge ahead of him, with the right-wing Freedom Party of Austria (FPÖ) announcing a no-confidence motion against the government on Tuesday afternoon, and the centre-left Social Democratic Party of Austria (SPÖ) proposing a no-confidence motion of their own, this one against the Finance Minister. Both were rejected, but it’s a sign of the chaos that awaits Schallenberg.

Fault lines in the coalition

The coalition between the centre-right ÖVP and the left-wing Greens has long been rocky, with the two parties far removed from each other on several issues.

The corruption allegations brought things to the brink, and last week it was the Greens who forced Kurz to backtrack and step down hurriedly after weeks of saying he would not resign.

The resignation seems to have resolved things for now, with Green leader and Vice Chanceller Wolfgang Kogler thanking Kurz on Tuesday forstepping down, and expressing gratitude that the party acted quickly and “in the interests of the republic”.

But Schallenberg himself has had disagreements with the junior coalition partner, most notably on the issue of migration. In August, Schallenberg criticised the Greens for their “derogatory tone” after Kogler accused the ÖVP of lacking humanity over the acceptance of more refugees from Afghanistan.

Speaking on national broadcaster ORF’s ZIB 2 news programme, the then Foreign Minister said of the coalition: “This is not a marriage of love […] but the cooperation actually works very well.”

Still, his background as a skilled diplomat could come in useful when it comes to smoothing things over between the parties.

Don’t count out Kurz just yet

Kurz will remain both leader of his party and a member of parliament, prompting accusations from his critics that he will continue to call the shots.

Alexander Schallenberg’s appointment as his successor, and his assertion that he’ll be working closely with Kurz, have done little to dispel these myths. The former foreign minister was virtually unknown before Kurz appointed him to his role, and Schallenberg has stood behind Kurz as one of his closest allies.

That said, leaving the chancellery doesn’t mean Kurz can escape the investigation that sparked his downfall.

The 35-year-old is accused of using government money to manipulate opinion polls in the press. On Tuesday, a poll analyst was arrested in connection with the probe, reportedly after having erased her computer hard drive shortly before her house was searched last week.

Despite dismissing the allegations as false and insisting on his innocence, Kurz has undeniably been seriously affected by the probe that saw several ÖVP-linked locations raided over the last week, and he could even face criminal charges.

How much does the public actually care about the allegations?

When swearing in Schallenberg, President Alexander Van Der Bellen noted that he had the task of restoring trust in the governing coalition.

“Words alone will not be enough. It takes hard, focused work and actions to restore confidence,” he said, words echoed by Schallenberg in parliament.

Opposition politicians on Tuesday accused Kurz and his party of making Austria a global laughing stock.

SPÖ leader Pamela Rendi-Wagner said that the fact Kurz faces potential criminal allegations means his party and the judiciary are “enemies”. She also criticized Schallenberg for his stated intentions of working closely with Kurz, saying “he who follows, cannot lead”.

But how much has the corruption scandal actually affected voter intentions?

Opinion polls from the Austrian Press Agency and polling institute OGM show that in March 2020, at the start of the pandemic, Kurz had an approval rating of 51 (this is not a percentage but a rating; a positive number means more people said they trusted him than did not trust him, and a negative figure signalling the reserve). This was the highest value achieved by any chancellor since 2003.

The ongoing scandal has had a clear impact, with Kurz’s rating at only nine by September 2021. Nonetheless, that still means the majority of people polled said they trusted him, while Schallenberg had a positive rating of just four points.