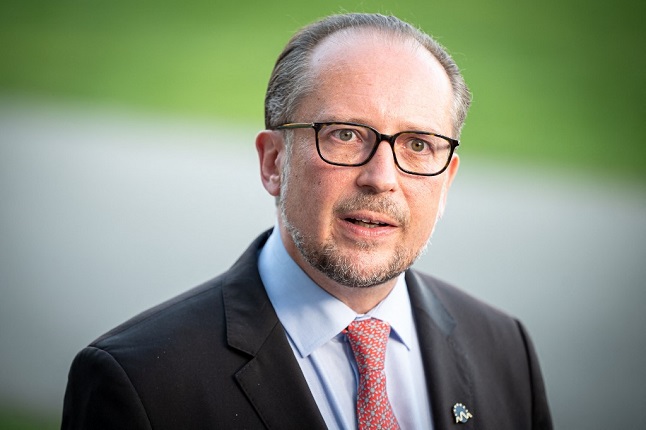 On Sunday night, Schallenberg made only brief comments to media in which he said the leadership change was “a surprise for all of us”.

Born in Switzerland, he spent his childhood in India, Spain and France where his father took on ambassador roles. Aged 52, he is divorced and a father of four.

The Foreign Minister began his career as a lawyer, heading up the legal section for Austria’s EU delegation in Brussels. After returning to his home country in 2006, Schallenberg became a press spokesperson for the Foreign Ministry, under ministers Ursula Plassnik and Michael Spindelegger.

In June 2019, the ÖVP-FPÖ government collapsed, and Schallenberg was made Foreign Minister in a transitional government, keeping his role when Sebastian Kurz won the election later that year — the only minister to do so. The new Chancellor promoted Schallenberg, giving him responsibility for “strategic foreign policy planning”.

Despite only becoming a member of the Austrian People’s Party relatively recently, he showed himself to be a defender of a tough party line on migration. In 2020, after a fire at a refugee camp in Greece, Schallenberg went on TV to reiterate the position of not taking in refugees from the disaster, calling to “remove the emotions from the debate”. He later said he regretted his choice of words but not his stance.

The new Schallenberg government is set to be sworn in on October 11th.

He’s seen as a strong ally of predecessor Sebastian Kurz, who told Der Spiegel in a 2007 interview that Schallenberg was one of the most talented ministers he had ever known.

Political analyst Thomas Hofer told AFP that his appointment meant Kurz would continue to be the party’s most influential person.

“In Kurz’s view, Schallenberg is a place holder… Kurz made his move in such a way that he still is in control of the party and has the government team on his side,” Hofer said.

One of the challenges facing the new Chancellor is leading a coalition with the Green Party, which has different views to the ÖVP on several issues and not least migration.

In August, Schallenberg criticised the Greens for their “derogatory tone” after Vice Chancellor Werner Kogler accused the ÖVP of lacking humanity over the acceptance of more refugees from Afghanistan.

Speaking on national broadcaster ORF’s ZIB 2 news programme, the then Foreign Minister said of the coalition: “This is not a marriage of love […] but the cooperation actually works very well.”