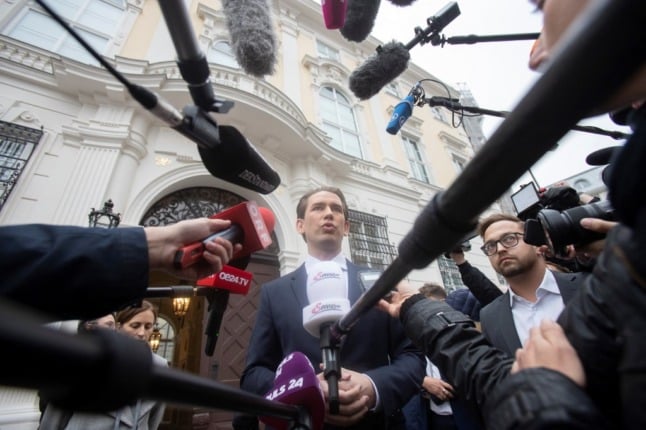 Austria's Chancellor Sebastian Kurz speaks to the media on Thursday, the day after he was implicated in a media corruption scandal. (Photo by ALEX HALADA / AFP)

What is Sebastian Kurz accused of?

Austria’s corruption inspectors suspect the Kurz’s ÖVP party may have used  taxpayers money to bribe pollsters and media figures in return for positive media coverage. The publication which benefited from the arrangement is believed to be the tabloid newspaper Österreich. The Economic and Corruption Prosecutor’s Office (WKStA), says the investigation is “exclusively motivated by party politics and surveys relevant to the (party) political advancement of Sebastian Kurz and the group of his closest confidants around him and the ÖVP federal party”, the Süddeutsche Zeitung reports. A demonstrator dressed as a prisoner in handcuffs and wearing a mask with the face of Austrian Chancellor Sebastian Kurz  is seen during a protest in in Vienna  after Kurz was implicated in a media corruption scandal. (Photo by ALEX HALADA / AFP)

How has Sebastian Kurz reacted to the accusations?

Kurz gave an interview on Wednesday with the ZIB2 channel in which he said he did not understand why he “should always be to blame”. He pointed out in the period under investigation (2016), he was foreign minister for Austria, not the Federal Chancellor. He said he could see “no evidence at all” for the accusations that he paid for surveys, Der Standard newspaper reports.

Is the government sticking by Sebastian Kurz?

This is a tricky one, because Austria is currently ruled by a coalition government of the Green Party and Kurz’s ÖVP party. The ÖVP party have said so far that they stand by the Chancellor. However, the Greens have said there are now “very serious allegations” and have started to distance themselves from Kurz. Green party chairman Sigrid Maurer has called on the ÖVP to find an “impeccable person” who can carry out this office,” broadcaster ORF reports. The Vice Chancellor Werner Kogler, who is also head of the Greens, says he will now explore other possibilities with the other parliamentary parties, and said it had become “extraordinarily difficult” to work with the ÖVP Chancellor. What about the opposition parties in Austria?

The leader of the opposition Social Democrats (SPÖ) Pamela Rendi-Wagner, said that if Kurz “had any decency left” he would resign, and has called for him to appear before Parliament to answer questions over the affair, Politico reports.

There is expected to be a motion of censure against Kurz in Parliament on Tuesday, which the Greens must back for it to succeed.

If Tuesday’s vote gets the required majority in parliament to succeed, it would be the second time Kurz — who became the world’s youngest democratically elected leader in 2017 — is deposed. The previous time was after the so-called Ibiza affair.

READ MORE: Ibizagate- what you need to know about the scandal which continues to grip Austrian politics A demonstrator protests with stickers on her cheeks against Austrian Chancellor Sebastian Kurz. (Photo by ALEX HALADA / AFP)

How are Austrians reacting to the latest developments?

Around 1,000 people gathered outside the front of the ÖVP headquarters on Thursday evening to demand Kurz’s resignation, the Kurier newspaper reports. A demonstrator holds up a placard during a protest against Austrian Chancellor Sebastian Kurz in front of the headquarters of the Austrian People’s Party (ÖVP ). (Photo by ALEX HALADA / AFP)

Who could be in charge if this coalition breaks down?

The ÖVP says if the Greens decide to break up the coalition government, it will open the door for Austria’s far right parties, such as the FPÖ, who have a vaccine sceptical platform. The centre left SPÖ party or the liberal Neos party could also join a coalition government.

Wasn’t Kurz already under investigation before this week?

Kurz and his allies have already been investigated over corruption in the  ÖVP party and scandals relating to the infamous Ibiza affair.

The Chancellor said on Wednesday that the latest accusations are “manufactured” and predicted that he and his colleagues would be exonerated of blame. 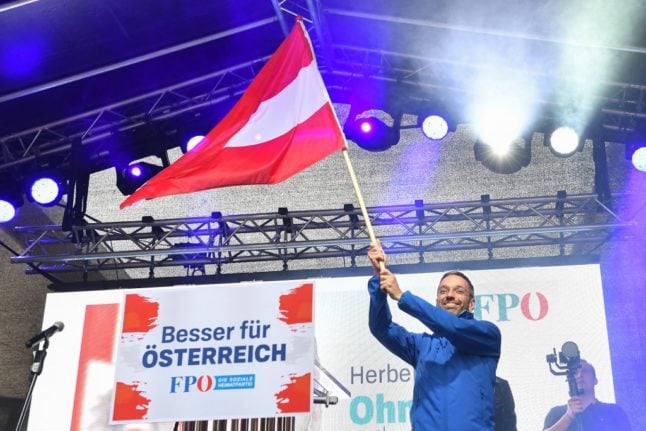 POLITICS
Why is support for Austria’s far-right FPÖ rising?
Url copied to clipboard!