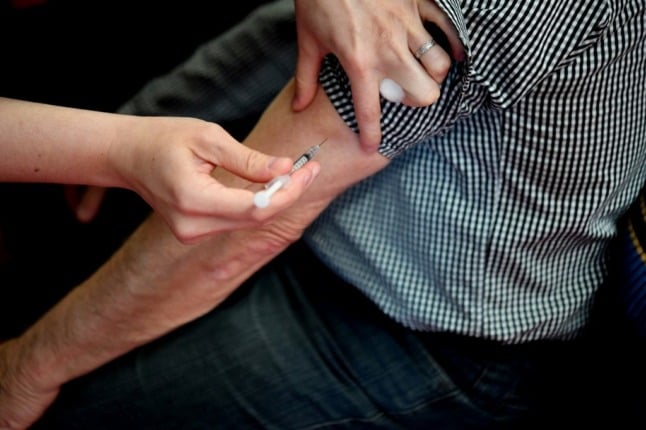 An elderly man receives a dose of the Pfizer-BioNtech Covid-19 vaccine on March 30, 2021. (Photo by Fred TANNEAU / AFP)

Just under 80,000 people have received a booster shot against Covid in Austria as at mid-October, despite there being no official plan to roll out the third jabs.

Austrian newspaper Der Standard reports that the government is yet to roll out its official booster program, meaning those who have got their third jab have received it on an unofficial basis.

Up until this point, it is only those who have serious health issues or are of advanced age who have received the jab.

In late October, the EMA approved the Moderna shot to be used as a booster.

Austria is planning to roll out a third Covid booster shot “in due course”, with indications that they are likely to start in aged care facilities in October.

At this stage, the final touches are still being added to Austria’s plan for rolling out booster shots.

Therefore, there is currently no official way in which a person can sign up for a third dose of the vaccine.

Health Minister Wolfgang Mückstein recently indicated that those who are deemed to be in risk categories will be notified by letter and will then be able to make a booking to get a booster shot.

If you have not yet received a letter but believe you are in a high-risk category and should have a booster shot, please contact your GP to discuss your situation and find out how you can be vaccinated.

Which states have been rolling out booster shots?

With the states playing the key role in administering booster shots, it is perhaps no surprised that the number of shots administered differs from state to state.

According to information published in Austrian newspaper Der Standard, the most were administered in Lower Austria (17,500), followed by 16,000 in Vienna.

Vienna authorities have indicated that booster shots should be made available for the most vulnerable and should be given at least six months after the previous shot.

People vaccinated with the Johnson and Johnson vaccine can register for a booster jab in Vienna from Thursday, September 30th.

The Austrian National Vaccination Board has now updated its recommendation to include a second dose of vaccine for those who were given the Johnson & Johnson jab.

Unlike the other vaccines which have been administered in Austria – namely Biontech/Pfizer, Moderna and AstraZeneca – the Johnson and Johnson vaccine does not require two shots.

However, Austrian authorities recommend taking another manufacturer rather than Johnson and Johnson as the second jab, for instance Biontech/Pfizer or Moderna.