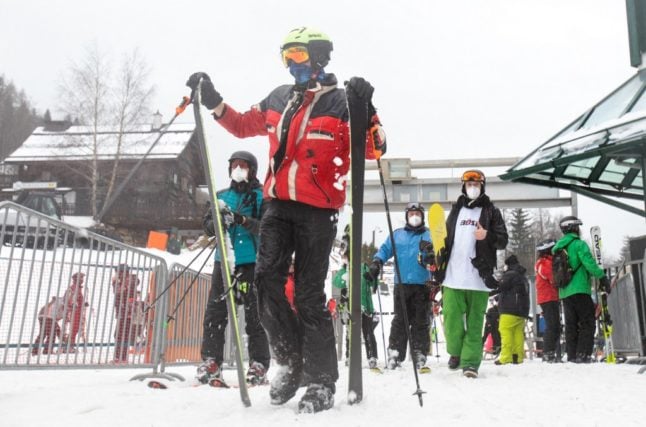 Will it be 2G for Apres Ski?(Photo by ALEX HALADA / AFP)

Austria-wide public transport ‘climate ticket’ to be unveiled on Thursday

Agreement with the federal states of Vienna, Lower Austria and Burgenland has been reached for an  Austria-wide public transport climate ticket, the Wiener Zeitung newspaper reports.

Environment Minister Leonore Gewessler will hold a joint press conference with the relevant state governors at 13.00 on Thursday. It should be possible to buy tickets from October 1st at an initial 15 percent discount until the launch date, which should be on the national holiday, October 26th.

The Klimaticket Now means it will be possible to use any regular transport (public and private rail transport, city transport and transport associations) throughout Austria, although it will not be valid for Wiener Linien, Wiener Lokalbahnen, Raaberbahn (Vienna Hauptbahnhof-Deutschkreutz), NÖVOG and the regional buses of the VOR region.

It can be bought online at www.klimaticket.at  and at all ÖBB and Westbahn counters.

READ MORE: 1-2-3 Ticket: Everything you need to know about Austria’s nationwide rail pass

Vienna attacker may have had accomplice

A 27-year-old Austrian citizen from Afghanistan is believed to have been an accomplice in the Vienna terror attack last year according to Der Standard newspaper. The paper says DNA traces were left by him on weapons and cartridges that were used in the attack. The man, who has been in custody since December, is also said to have lived with the assassin.

His behaviour on the day of the attack was also suspicious, it reports. He turned off his phone from midday until the time of the attack, when it was de-activiated. His wife says the suspect’s family deleted chats.

The suspect’s lawyer Elmar Kresbach has accused the authorities of arresting the 27-year-old to “cover up” their own failures and says his client “knew nothing”.

READ MORE: ‘We are in shock’: Austrian capital reels after gunman kills four

People vaccinated with the Johnson and Johnson vaccine can register for a booster jab in Vienna from Thursday. The Austrian National Vaccination Board now recommends a second dose of vaccine for those who were given the Johnson & Johnson jab.

An mRNA vaccine (Moderna or Biontech / Pfizer) is recommended, but people are free to choose which vaccine they wish to have for a booster. The second jab should be given no earlier than 28 days after the first vaccination.

The virologist Dorothee von Laer from the Medical University of Innsbruck has told broadcaster ORF that she believes a “slimmed down” form of après-ski will be possible in the coming winter season. However, she believes there should be a “2-G rule” in place for après-ski (meaning only allowed for those vaccinated or with proof of recovery from a Covid-19 infection) and a “3-G rule” (tested negative, vaccinated or recovered from Covid-19)  for skiing to be sensible. She said there would not be an immediate return to life as it was before the pandemic.

However, von Laer estimates around 70 percent of people in Austria are immune from Covid-19 because they either had the infection or are vaccinated. In order to reach “Freedom Day”, and a further relaxation of restrictions, Austria would need an immunity of over 80 percent, she believes.

Calls for EU to recognise Sinopharm and Sputnik vaccines
Austria’s hotelier association is demanding the EU recognise vaccines from Russia and China such as Sputnik and Sinopharm so it can attract seasonal workers for the winter season, broadcaster ORF reports.

The Ministry of Tourism has been in negotiations with the Ministry of Health for months over this issue, the broadcaster reports.