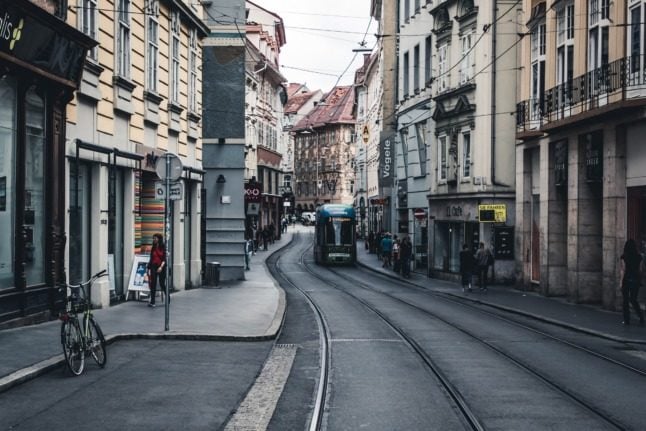 Graz could get its first female communist mayor, after elections were held at the weekend in Austria. Photo by Quaritsch Photography on Unsplash

The number of Covid-19 infections appears to be falling in Austria. In the 24 hours from Saturday to Sunday, 1,588 new corona cases were registered, compared to 1,678 the week before.

Analysis of sewage also points to a downward trend of Covid-19 infections  in Austria, the Kronen Zeitung reports. A team from the Institute for Water Quality and Resource Management at the Vienna University of Technology, called “Coron-A”, has been examining wastewater samples from sewage treatment plants for SARS-CoV-2-RNA since April 2020.

At the peak of the pandemic in April, ten times more SARS-CoV-2 genetic material residue was detected in wastewater compared to the present situation, according to the microbiologist Heribert Insam at the University of Innsbruck. He is quoted as saying the data currently “does not indicate that the curve is going up as steeply as last year.”

The vaccine sceptic FPÖ lost ten percentage points in the elections, and ended up with only about 19.8 percent of the vote. ORF comments this could be due to the success of a new political party based on vaccine scepticism, the People Freedom Basic Rights (MFG) party, which only came into existence in February.

Austria’s new vaccine sceptic political party, which is called the People Freedom Basic Rights (MFG) party was able to enter the Upper Austrian state parliament in state elections held on Saturday, after gaining more than six percent of the vote.

The People Freedom Basic Rights (MFG) party was particularly popular in communities with a low vaccination rate, gaining 20 percent of votes in the Maria Neustift ward, where vaccination coverage in the community is just 44.7 percent, broadcaster ORF reports.

Here it came second to the ruling OVP party. In Auerbach in the Braunau district, where 34 percent are vaccinated, MFG achieved over 15 percent and landed in third place.

Graz could end up with its first female communist mayor as the Austrian Communist Party (KPÖ) overtook Austria’s centre right ÖVP party with 28.9 percent of the vote. Graz’s Mayor Siegfried Nagl (ÖVP) announced his resignation in an ORF TV special on Sunday.

According to broadcaster ORF, The Graz KPÖ leader Elke Kahr is considered to be a politician of integrity, and is “relaxed, committed and competent in social and housing issues”. The election campaign focused on improving the traffic situation in Graz, with proposals to improve roads and the city’s S-Bahn.

The victory of the communists in Graz has led to a number of memes on social media, with some dubbing the town Graznost and LeninGraz, and posting images of the Styrian capital’s most famous celebrity, Arnold Schwarzenegger, dressed as a Soviet soldier.

Vienna will start carrying out a vaccination campaign in its social municipal housing estates. The first estate to be targeted will be the Reumannhof in the Margareten district. A number of other community buildings will follow in the coming days.

Vaccination will be possible from 11:00 to 20:00 and there will be  a choice of  Biontech / Pfizer and Johnson and Johnson vaccines. No registration is necessary, people should just bring a photo ID and, if available, an e-card.