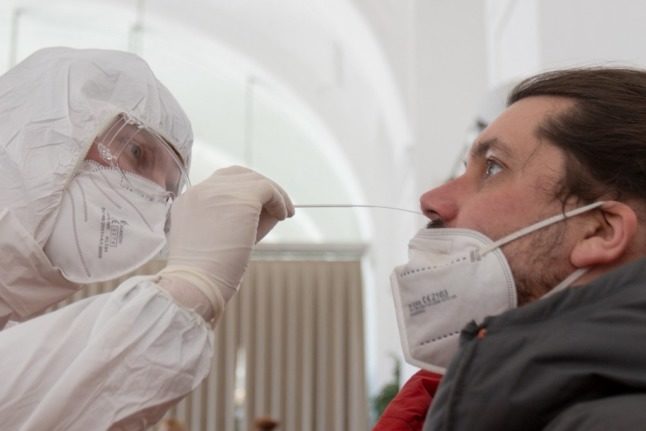 A health worker takes a coronavirus antigen rapid test swab at the new coronavirus test center in the Orangery of the Schoenbrunn Palace on February 4, 2021 as Vienna expands its capacities for the rapid antigen test, amid the ongoing Covid-19 pandemic. (Photo by ALEX HALADA / AFP)

Covid-19 tests will allow access to bars and restaurants for a shorter period of time from 1st September in Vienna, Mayor Michael Ludwig announced on Tuesday. Antigen tests taken in a test centre or pharmacy will be valid for just 24 hours, while the PCR test validity will be reduce from 72 to 48 hours.

The changes will not apply to children aged under 12, who are not eligible to be vaccinated. People must show that they have tested negative, recovered from or been vaccinated against Covid-19 to access restaurants, bars and sporting and recreational facilities in Austria’s capital, so the move will make life harder for people who have not been vaccinated.

Five deaths due to Covid-19 in Austria on Tuesday

Five coronavirus-related deaths have been reported on Tuesday in the past 24 hours – one of the sharpest increases in recent weeks, the Wiener Zeitung newspaper notes.

In total, 10,768 people in Austria have died of or with Covid-19 so far. The number of those being treated in a hospital for Covid-19 is also steadily increasing: 398 people were reported on Tuesday, an increase of almost 50 percent within a week. 84 people needed care in an intensive care unit.

The Medical Director of the Vienna Health Association believes greater restrictions, in which only vaccinated people will be able to access bars, restaurants and sporting facilities (the so-called 1-G rule) may be necessary to avoid lockdowns and allow people to mix.

The doctor told the Vienna Today programme he expects a “significant wave” to hit Austria on Tuesday evening, due to the more infectious Delta variant of Covid-19.

Austria’s Federal President Alexander Van der Bellen called for up to 1,000 refugees from Afghanistan to be accepted in Austria at the official opening of the European Forum in Alpbach.

Broadcaster ORF reports that he believes there is a legal, moral and political obligation for the EU and its member states to provide protection for those who are forced to leave their country. He said the priority should be women and girls who have worked for the EU or their countries.

Austria’s Interior Minister Karl Nehammer  has visited Lithuania to highlight the work of Austria in trying to secure the border with Belarus. For months, the authoritarian Belarusian ruler, Alexander Lukashenko, has been encouraging migrants to cross into the EU from Belarus.

Since May, more than 4,000 people have crossed the border illegally from Belarus, the Kronen Zeitung newspaper reports, while in the  whole of 2020 81 migrants made the crossing. Austria is now assisting Lithuania in putting up a fence along 500 kilometres of the country’s border.

Austria is helping with the deployment with 13 Cobra officers and 50 living and sanitary containers, the paper reports. Nehammer also criticised the EU Commission during the trip, saying it was more important to prevent illegal migration than talk about the additional admission of migrants, the newspaper reports.