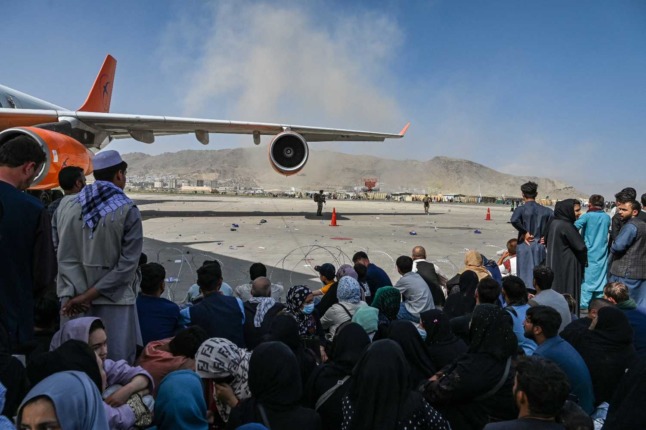 Scenes from the Kabul Airport in Afghanistan as the Taliban continues to take over the country. Wakil Kohsar / AFP

As dramatic scenes of people trying to escape at Kabul Airport were broadcast across the world yesterday, the Mayor of Vienna Michael Ludwig called for Austria to accept asylum seekers from Afghanistan.

Ludwig took to Twitter to say he was “deeply shaken” by the footage and that Austria and the international community has a responsibility to help people at risk in Afghanistan.

He described Vienna as a human rights city and called for protection for Afghan people who worked closely with Austrian representatives as part of the activities by the European Commission in Kabul.

Ludwig added Vienna is “ready” to accept asylum seekers from Afghanistan in the city and called upon the federal government to do more.

“I am deeply shocked by the dramatic images from #Kabul. The international community, including Austria, is called upon to provide immediate assistance.”

“The federal government must therefore place these people under international protection. Vienna declares itself ready in any case to take in such people in our city – which is not a human rights city for nothing. Now we have to stick together!”

This was followed by an ORF “Summer Talks” interview with the leader of the Greens and Vice Chancellor Werner Kogler on Monday evening.

Kogler said deportations to Afghanistan would no longer take place in line with the European Convention of Human Rights and asylum applications would continue to be accepted.

The Convention prohibits people from being deported back to a country where there is a risk of torture or a danger to life and limb.

However, when Kogler was asked directly if Afghan asylum seekers should be accepted in Austria, he said Austria should offer support, especially in protecting women. But he said he could not elaborate further, “because we do not rule alone”.

Interior Minister Karl Nehammer (ÖVP) has come under fire in recent days following comments that people would continue to be deported to Afghanistan as long as it was possible.

“The European Union must not be surprised and overwhelmed by migration flows again!” Stelzer said.

On Monday, Tyrolean SPÖ leader Georg Dornauer, told ORF he has changed his stance on the issue and now supported a freeze on deportations to Afghanistan.

Also on Monday, Italian politician Federica Dieni, from the Five Star Movement, criticised the Austrian Federal Government for speaking out against stopping deportations to Afghanistan, as reported by Der Standard.

In an interview with Radio 24, Dieni said: “The Austrian position is to be condemned.”

READ MORE: Will Vienna restrict sport, leisure and gastronomy facilities to the vaccinated?

Kneissl has submitted a letter of resignation effective from Friday, Rosneft said in a statement.

The 57-year-old made headlines when she invited Putin to her wedding in 2018 and was photographed dancing with him during the event.

She left the Austrian government the following year and joined the board of Rosneft as an independent director in June last year.

Her resignation comes after Rosneft announced Friday that German ex-chancellor Gerhard Schroeder was leaving the board after five years, a day after Germany stripped him of official perks over ties with Russia.

On Friday, Kneissl told AFP that she intended to stay on for her one-year mandate but had told Rosneft in March that she would not seek a further term on the board. Kneissl’s personal website includes several interviews to RT, a Russian state-funded news organisation, the latest two days before Russia launched its military operation in Ukraine on February 24.

Rosneft in its statement thanked Kneissl for her work during the “complex” international situation, saying it was counting on future collaboration with her as an expert.

VIENNA
Why does Vienna’s waste department have a helicopter and a military plane?
Url copied to clipboard!