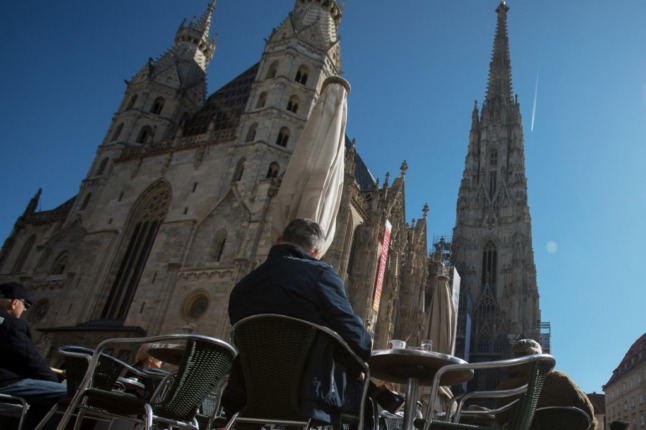 Guests sit in a coffee in front of St Stephen's Cathedral in Vienna, Austria on March 15, 2020. (Photo by ALEX HALADA / AFP)

Covid-19 infections on the rise in Austria

The number of new infections in Austria with Covid-19 is rising again. On Tuesday 865 new cases were reported, the highest since May 12, when there were 997 infections.

However, this is far fewer than on May 12, when 797 people were in hospital and 337 people in the intensive care unit. The number of deaths also remains at a low level, broadcaster ORF reports.

Kindergartens in Lower Austria to re-open with lollipop tests

Kindergartens in Lower Austria will reopen with a 3G rule for teachers and  staff as well as anyone wishing to enter the premises.

The 3G rule means you must be able to show proof of having tested negative for, recovered from or been vaccinated against Covid-19.

Children will take ‘lollipop tests’ two to three times a week, broadcaster ORF reports. There will also be compulsory vaccination for new employees.

Sewage will be monitored as an ‘early warning’ system and there will also be funding for air filtering systems.

A medical worker prepares a newly developed, lollipop-shaped Covid-19 test prior to the testing of pre-schoolers at the ‘City of Vienna Kindergarten’ in Vienna, Austria. (Photo by JOE KLAMAR / AFP)

Since Wednesday, people have been able to come to be vaccinated in Vienna’s St Stephen’s Cathedral without pre-registration.

There has been a sharp rise in infections in the capital with 258 new case reported on Wednesday, the highest number since May 12, when there were 289 infections, broadcaster ORF reports.

It is hoped more people will come forward to be vaccinated. City Councilor for Health Peter Hacker said of the 60 people currently undergoing treatment in intensive care in hospital in Vienna, almost all had not been vaccinated.

FPÖ party chairman Herbert Kickl does not want to be vaccinated

The chairman of Austria’s far right FPÖ party Herbert Kickl has announced he is not vaccinated and intends to stay that way.

He also denounced compulsory vaccination for various professions and the pressure the government is putting on citizens to get the jab in Austria, saying it could lead to professional disadvantage or children being bullied in school, Der Standard newspaper reports.

He also said he has “no problem at all” when someone is vaccinated, the newspaper reports. He has called on Austria’s Chancellor, Sebastian Kurz, to pledge there will be no compulsory Covid-19 vaccination in Austria.

Austria’s oldest synagogue, which is also a listed building, is currently run down and being used as a garage, Der Standard newspaper reports.

The historic building is located in Korneuburg in Lower Austria. The temple, built in the 14th century, is one of the most important in Europe, even if it has not been used for religious purposes since the Jews were first expelled in 1420, the newspaper reports. It is hoped that the building may be purchased and restored.