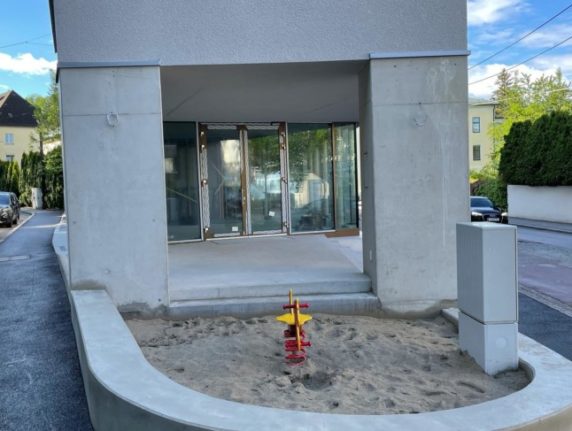 Welcome to the world's most depressing playground. Image: Jahnsportpark/Twitter

The playground is in fact a small sandpit situated next to a road. It features a rocking horse with a spring and a large, grey electricity box, i.e. every child’s favourite things to play with.

The playground was named as “the world’s most depressing 2021” by German comedy news website ‘Made My Day’ and has since gone viral.

Since being installed, Austrian news reports that people have even come from far away to visit the playground on Salzburg’s Hübnergasse – just 300 metres from Mozart’s birth house – and take pictures.

The playground appears to have been built to comply with building regulations, Austria’s Kronen Zeitung reports.

New buildings with more than five apartments need to build a playground, although according to regulations, this playground must be at least 45 square metres and include a slide, swings, sandpit and seating, while being visually accessible from all apartments.

Despite this building having seven apartments, the playground has only ticked the ‘sand’ box, although perhaps you could sit on the electricity box if you wanted a good view of your kids.

If the developer wants to save the playground from being demolished, it can pay a compensation tax to the city, although the city would need to approve such an arrangement, which seems unlikely considering they have deemed the playground not to be “meaningful”.

As a result of the playground’s viral fame, other social media users have also started posting their entries for most depressing playground.