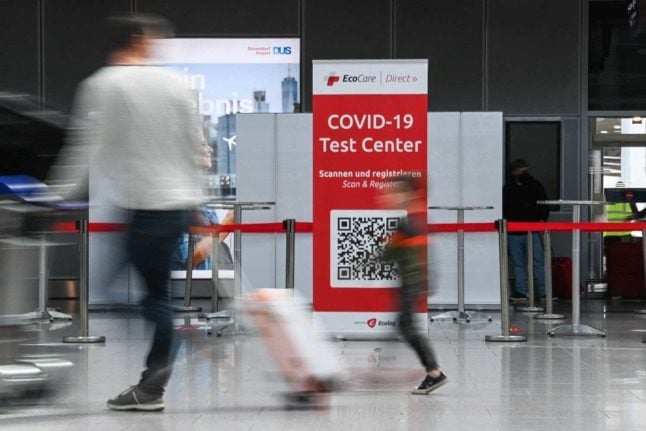 PCR testing will be mandatory for some arrivals to Austria. Photo: Ina FASSBENDER / AFP

Health Minister Wolfgang Mückstein first announced the new measures at a press conference on Saturday and the government has now confirmed the date when the changes will come into effect.

Fully vaccinated and recovered people – i.e. people who have had the virus recently and who have recovered – with at least one vaccination are excluded, the Austrian press agency APA reports.

Mückstein said the government was concerned about the amount of infections in Austria which are related to travel, whether that be through returning travellers or through people arriving in Austria.

“Around a third of new infections can be traced back to travel, and numerous infections are spread by people who return to travel. The federal government is therefore turning the screws a little tighter in this area” he said.

“In this way we are containing the rapid spread of the virus and protecting those people who are currently unable to get vaccinated.”

Mückstein said any further lockdown measures would take into account hospitalisation and fatality rates in addition to infection numbers.

What do you have to do when arriving in Austria?

If you are arriving in Austria from Spain, the Netherlands or Cyprus, you will need to show a negative PCR test.

This applies to Austrian citizens and residents, as well as people who are citizens or residents of other countries.

If you have not done so, you will have to take a test at the airport. These will be provided for free, Kurier news reports.

Once the test has been done, you may leave the airport. You will not have to quarantine in the meantime and will only need to quarantine if the result is positive.

TRAVEL NEWS
Reader question: Can I get a refund after cancelling my Austria trip due to Covid?

Most of Europe had dropped the testing requirement for fully-vaccinated arrivals in the spring, but the US has maintained the requirement to show proof of a negative test for all arrivals.

However on Friday, the Biden administration announced that it would not renew the testing requirement.

The new rule is expected to come into effect at 12.01 Sunday EDT, until then passengers will still need to show a negative Covid test before they can board a plane to the US.

The US currently bars unvaccinated travellers from entry – although this does not apply to US citizens, US residents or those travelling for essential reasons – there was no announcement on lifting this restriction.

The CDC said that testing requirements could be reinstated if new variants of Covid emerge, and added that it continues to recommend pre-travel testing.

Covid travel rules vary between individual countries in Europe, but most countries now only require pre-departure tests for unvaccinated travellers. Check the rules of the country you are travelling to for full details.

To be counted as ‘fully vaccinated’ travellers must have received both doses of an EMA-approved vaccine – Pfizer, Moderna, AstraZeneca (or a single dose of Janssen).