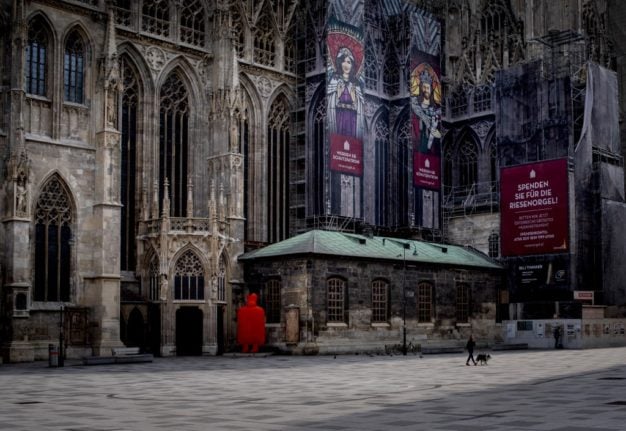 Vienna will keep masks in retail and for culture

Vienna will continue to enforce mask rules in all its retail stores even after July 22nd, when the mask requirement in the rest of Austria will be relaxed in retail.

People will also have to wear masks for indoor cultural events such as indoor gatherings or going to the cinema, it was announced on Tuesday.

There will be stricter requirements to show negative PCR tests in clubs and late night venues as well, using the Everyone Gurgles (Alles Gurgelt) scheme.

The far-right FPO party has criticised Vienna’s decision and says it will drive people into nearby Lower Austria or Burgenland, where they will not have to wear masks.

The trade association also said it was difficult for people to work wearing a mask in retail, broadcaster ORF reports. The state of Carinthia also wants to start using the “everything gurgles” PCR tests in mid-August, ORF reports.

St Stephen’s Cathedral is the latest place in Vienna to open as a vaccine centre, according to the Kurier newspaper.

Previously vaccinations have been carried out at the film festival at the Vienna City Hall Square and the vaccination boat on the Old Danube.

Vienna is planning more innovative vaccination campaigns, broadcaster ORF reports, and will now allow people to choose which vaccine they will get when they register for an appointment online.

Meanwhile in Lower Austria a three-day vaccination campaign started on Tuesday at the primary care center (PVZ) in St. Pölten, allowing people to be vaccinated without registering in advance.

Long queues of people were reported. Styria is also carrying out a large vaccination campaign at all its vaccination centres this coming weekend. No appointment will be needed in advance.

Some states in Austria are considering making vaccination against Covid-19 compulsory for teachers as well as kindergarten, care home and medical staff, broadcaster ORF reports.

Lower Austria’s education councillor Christiane Teschl-Hofmeister has called for a “discussion” around the problem and said he would most like a national solution.

However, Lower Austria is also prepared to “go it alone”, broadcaster ORF reports.

In Vienna, compulsory vaccination for kindergarten staff has already been introduced, and they are considering also making it compulsory for new teachers to be vaccinated.

However, all other federal states has said they are not planning to introduce the measure. Chairman of the ARGE teachers in the public service union (GÖD), Paul Kimberger, says it is unnecessary, as almost 80% of  teachers have already been vaccinated.

Students at the Hagenberg University of Applied Sciences managed to easily fake a QR code for the Green Pass due to weaknesses in the  Federal Computing Centre (BRZ) app for saving the Green Pass. The weaknesses were revealed in the Kurier newspaper futurezone.at website. The Ministry of Health says this will be fixed with the next update.

The seven-day incidence, or the number of new infections with the coronavirus in the past seven days per 100,000 inhabitants, is 25.4 . A sharp increase can be seen in Salzburg, where the number is now 53.3, followed by Vienna with 36.5. The value is still lowest in Burgenland (8.1).

The Austrian government is being sued in the the European Court of Human Rights (ECHR), after a 19-year-old soldier who died after overheating on duty in 2017. The soldier collapsed in August 2017 near his barracks in Horn in the Waldviertel. The courts in Austra had already absolved the soldier’s superiors of any wrongdoing, broadcaster ORF reports.

From Thursday, it will only be possible to visit nightclubs in Vorarlberg with a negative PCR test or proof of vaccination. To cope with demand, 26 pharmacies in Vorarlberg are now offering free PCR tests, the state announced today. In addition, politicians have announce stricter controls in the catering industry.

The move comes after a spate of Covid-19 infections in late night venues. Failure to provide evidence of a low epidemiological risk will therefore risk a fine of 90 euros in the future. The range of penalties for administrative fines for guests is, as before, 500 euros, for operators, 3,600 euros.

Now nightspot is source of 60 infections

The coronavirus “superspreader’” cluster around a nightspot in Kaprun in the Salzburg region has now grown to 60 infected people, newspaper Salzburger Nachrichten reports.

The upper limit on cash transactions of 10,000 Euros is looking likely to come into force throughout the EU, despite Austria’s strong objections.

According to a survey by the Ministry of Finance, 80 percent of those questioned are very sceptical about an upper limit for cash payments and a further twelve percent are quite sceptical.

Finance Minister Gernot Blümel announced last week that he wanted to communicate Austria’s critical stance in Brussels, but he is unlikely to be able to overturn the decision, according to Der Standard newspaper.