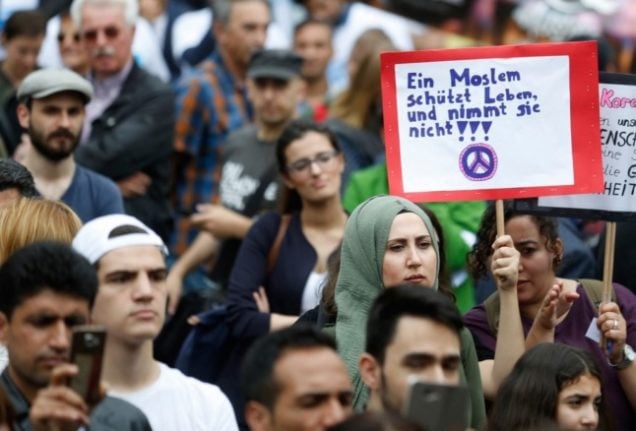 Broadcaster ORF reported a man urinated against a Muslim prayer house in Graz. In Vienna signs were put up around the city warning people were walking past Muslim organisations.

So who created the map, and why has it caused such controversy?

The map project is not new. As early as 2012, an “Islamic map” was created as a project financed by the EU and the Ministry of the Interior, in which islamic associations and their geographical location in Austria were available on the website of the University of Vienna. There was criticism of the project and it is no longer online.

The latest online map was a joint project by the the Documentation Centre for Political Islam and the University of Vienna.

The Documentation Centre for Political Islam was set up in 2020 by the Austrian coalition government (The ÖVP and Greens), with the intention of scientifically documenting and researching so called “political Islam”, defined as religiously motivated political extremism. According to Austria’s Minister for Women and Integration, Susanne Raab of the ÖVP, this meant examining networks and structures that could be the “breeding grounds” for extremism.

She listed clubs, social media, kindergartens and schools as those which would be examined when the centre was launched.

Critics say the centre singles out the religion of Islam as involved in political extremism, pointing out there are no similar centres which monitor other religions.

At the unveiling of the latest Islam map, the academic Ednan Aslan from the University of Vienna, told reporters it would show the diversity of Islamic life in Austria in all its shades, pointing out it also showed which institutions make positive contributions to integration, such as offering German courses or looking after refugees.

No ‘general suspicion’ of Muslims

He added the the map could also allow the government to observe possible foreign influences on the organisations and work out the difference between the religion and the ideology of political Islam.

Raab denied there was “general suspicion” of Muslim organisations, according to the Austrian newspaper Kleine Zeitung.

The map is now offline, following what Aslan described as “shocking and disturbing” actions by a “wide variety of right-wing extremists” and which he condemned in the “strongest possible terms”.

He said he believed there was still a “an urgent need” for an objective debate about Islam in Austria and said the Islam map can make a meaningful contribution to this.

However, many Muslims living in Austria are opposed to the publication of the map, which records 623 Muslim organisations in Austria in detail.

As some associations are registered with the home addresses of founders, this meant in some cases people’s home addresses were published on the map, although these would already have been available through searching on a government database.

The Local spoke to Vienna-based Muslim academic Farid Hafez, who is conducting research in to Islamophobia for Georgetown University.

He said: “If you look at this Political Islam documentation centre, it has been very clear what this is all about. They said last year, we want a map of Muslim institutions to tell them who to cooperate with and not, who are the good Muslims and the bad Muslims.”

Mr Hafez said in addition to the Islamophobic incidents reported in the Austrian media, people he knew whose addresses were on the map had been visited by strangers who stood outside their homes and stared in.

The Local spoke informally to other people living in Austria, some reported they thought the map was “OK” as it showed public places, meaning the information should be available. Another woman pointed out the Catholic Church was also well documented, with information available on a website.

Some believed the map should not have been made public if it was involved with research into extremism by the government, and another woman said a similar map of Jewish organisations would never have been published, due to the risk of anti-semitic attacks.

‘It should be removed immediately’

One woman said: “I’m not of a Muslim background, but I view this map as Islamophobic, discriminating, fear-mongering and as putting our Austrian Muslim community in danger. It should be removed immediately.

“Anti-Islamic racism is on the rise in Austria, unfortunately, and instead of working on making Muslim citizens feel safe, they are being treated as a threat.”

An article by the Wiener Zeitung newspaper reports the University of Vienna and the Green Party have both distanced themselves from the map since it was unveiled in late May. The university has decided to remove its logo from the project  finding it problematic that the project asked for information on individual associations or mosques to be reported.