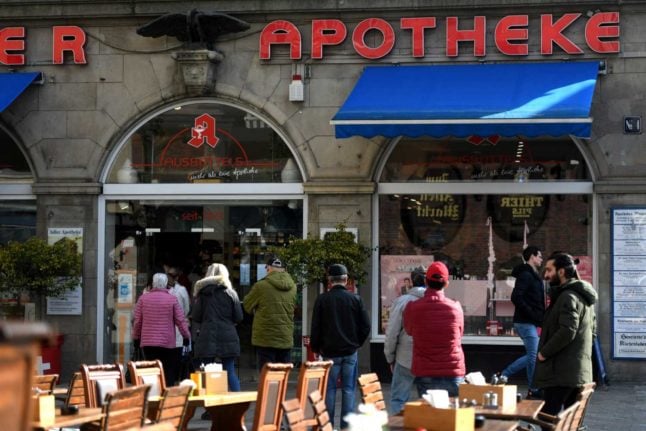 People keep their distance while lining up outside a pharmacy. Photo: Ina FASSBENDER / AFP

Many new arrivals to Austria might have a hard time finding ibuprofen, paracetamol or aspirin in their general store, supermarket or even the drug store.

This is because painkillers are only sold at pharmacies in Austria.

New arrivals or even people who have been in Austria for quite some time – particularly from English-speaking countries – will not only be surprised by this, but also the high costs.

What is Austria’s e-card? Everything you need to know

Painkillers such as Paracetamol and Ibuprofen are expensive in Austria, particularly when compared to the United States, United Kingdom or Australia.

They can only bought in a pharmacy, rather than a supermarket or a store such as Bipa or DM.

In some cases, people are prescribed painkillers by their doctor to bring down the cost.

It is the same in neighbouring Germany.

Why are painkillers only sold in pharmacies?

The discount cosmetic store DM has wanted to offer over-the-counter drugs in Austria for years, and says it could sell them cheaper than in a pharmacy.

DM sought to bring its case to court, arguing that the ban was an unconstitutional barrier on freedom of trade.

DM argued that it and similar retailers should be allowed to sell painkillers for reasons of patient protection, drug safety, health and consumer protection

However, the constitutional court rejected this attempt to break the pharmacies’ monopoly on these drugs, saying the rule was necessary in the public interest.

Vienna AT newspaper reported that the court decided there was a “public interest” justification for why shops and supermarkets should not be allowed to sell painkillers.

The court pointed out that pharmacies were “subject to numerous public, professional and disciplinary obligations” to ensure public health.

According to the decision, medications such as painkillers “should not be treated the same as consumable goods”.