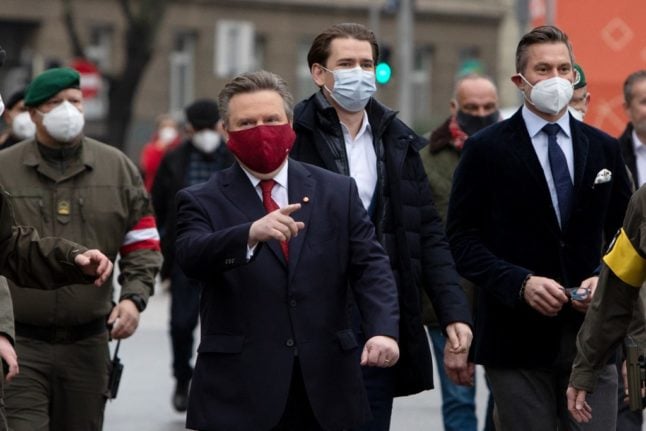 “I am cautious and I don’t want to raise anyone’s expectations,” Ludwig of the Social Democrats told broadcaster Ö1 – a day after Chancellor Sebastian Kurz said that most restrictions would be lifted next month.

Ludwig said that there had been no significant improvement in the situation in Vienna’s intensive care wards in recent weeks, even if occupancy had dropped slightly. “It won’t be possible to open everything in one go,” he cautioned.

There are currently over 500 Covid-19 patients in Austria’s intensive care wards.

Kurz promised in a press conference on Friday that lockdown measures in the areas of culture, sport, gastronomy and tourism would be relaxed in May.

“We are in the last metres in dealing with this pandemic. Freedom is within one’s grasp,” Kurz said optimistically after meeting with state leaders and health experts in Vienna on Friday.

Kurz said the deliberations were “swift and harmonious”, despite divergent opinions on which path Austria should take out of lockdown.

However, he declined to give specifics of the measures that would be relaxed in May, except to say that the easing would come into effect at the same time across the entire country.

READ MORE: ‘Freedom is near’ – Austria to relax most coronavirus measures in May

Meanwhile, the state of Burgenland is forging ahead with plans to end its lockdown next Monday, a decision that has come in for criticism in other parts of the country.

Ludwig said that Burgenland was moving ahead too quickly, stressing that, “I have chosen a different path because the health of the people is the most important thing to me.”

SPÖ leader Pamela Rendi-Wagner also said that the state on the Hungarian border risks causing a public health fiasco due to the high level of intensive care occupancy in its hospitals.

Roland Fürst, a leading figure in the Burgeland government, responded by saying that, “all of these accusations are completely absurd and testify to a narrow understanding of political responsibility.

“Who actually takes responsibility for the massive psychological, physical, social and financial problems that are already escalating and their resultant damage?” he said.

HEALTH
Monkeypox in Austria: What causes it and is it serious?

A 35-year-old man was confirmed as the first case of monkeypox in Austria this Sunday, 22nd, according to Viennese medical authorities.

The man is isolated in a clinic in the Favoriten district and “is doing well under the circumstances”, health authorities said. On Sunday, the patient went to the clinic with a slight fever and isolated skin lesions.

This is the first case in Austria of a “multi-country monkeypox outbreak in non-endemic countries”, as the World Health Organisation (WHO) says.

READ ALSO: EXPLAINED: How Austria’s compulsory vaccine mandate could be back in June

The monkeypox virus is well known but endemic to isolated regions in Africa. Experts are still unsure why the disease has been spreading outside of Africa in people with no connection to the affected areas.

Monkeypox, Affenpocken in German, is a zoonotic virus (a virus spread from animals to humans) that most often occurs in areas of tropical rainforest in Central and West Africa. However, it is occasionally found in other regions, and cases have recently been discovered in Europe, North America, and Australia.

The name monkeypox originates from the initial discovery of the virus in monkeys in a Danish laboratory in 1958, according to WHO. The first human case was identified in a child in the Democratic Republic of the Congo in 1970.

How is it transmitted?

Monkeypox virus is transmitted from one person to another by close contact with lesions, body fluids, respiratory droplets and contaminated materials such as bedding. The incubation period of monkeypox is usually from 6 to 13 days but can range from 5 to 21 days.

People can also be infected through contact with the lesions of the skin, blood, tissues, or excretions of infected animals (mainly rodents) and by handling the meat of sick animals.

The disease is not known to be sexually transmitted. Still, close contact between people during sex can make the transmission of the virus easier.

READ ALSO: EXPLAINED: What is Austria’s ‘tick vaccine’, and should you take it?

Many of the cases presented are in men who have sexual relations with other men and health authorities have asked for extra care and are studying current cases.

What are the symptoms?

The symptoms of monkeypox include fever, headache, muscle aches, swollen lymph nodes, chills, and exhaustion. In addition, a rash similar to chickenpox typically develops, often starting on the face and spreading to other parts of the body, including the genitals.

Monkeypox typically has an incubation period of six to 16 days, but it can be as long as 21 days. Once lesions have scabbed over and fallen off, the person with the virus is no longer infectious.

READ ALSO: ‘Mysterious hepatitis’: Everything we know so far about the new cases in Austria

Monkeypox is usually self-limiting, and people recover in a few weeks, but it may be severe in some individuals, such as children, pregnant women, or persons with immune suppression due to other health conditions.

How can I protect myself and others?

There is no specific vaccine against this virus that would be widely available, but the common smallpox vaccine already offers high protection and is recommended for close contacts and health workers.

“Historically, vaccination against smallpox had been shown to be protective against monkeypox. While one vaccine (MVA-BN) and one specific treatment (tecovirimat) were approved for monkeypox, in 2019 and 2022 respectively, these countermeasures are not yet widely available.”, according to the World Health Organisation.

For now, there are no large vaccination campaigns for smallpox, and WHO is convening experts to discuss recommendations on vaccination.

“Steps for self-protection include avoiding skin to skin or face to face contact with anyone who has symptoms, practising safer sex, keeping hands clean with water and soap or alcohol-based hand rub, and maintaining respiratory etiquette”, according to the World Health Organisation.

If people develop a rash, accompanied by fever or a feeling of discomfort or illness, they should contact their health care provider and get tested for monkeypox, the organisation added.

READ ALSO: Reader question: Do I need to wear a mask on flights to/from Austria?

If someone is suspected or confirmed as having monkeypox, they should isolate until the scabs have fallen off and abstain from sex, including oral sex.

During this period, patients can get supportive treatment to ease monkeypox symptoms.

Anyone caring for a person sick with monkeypox should use appropriate personal protective measures, including wearing a mask and cleaning objects and surfaces that have been touched.