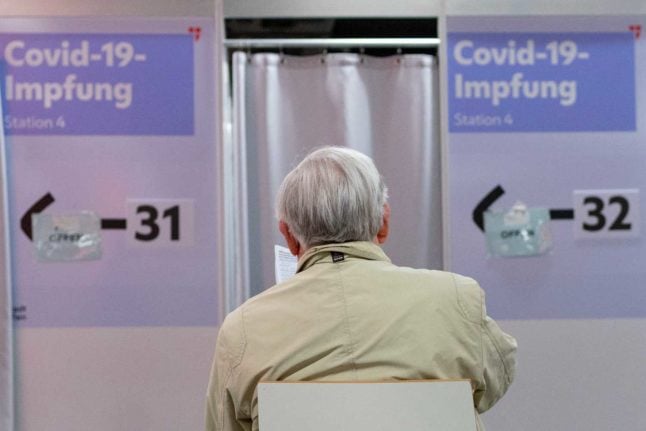 A man waits to be vaccinated at a vaccine centre in Vienna, Austria. Photo: Joe Klamar/AFP

Despite a worldwide scarcity of supply, some countries allow residents to choose which vaccine they want to take.

In Austria however, the official position is that choosing which vaccine you take is not currently possible – but this may change in the future, when vaccine stocks increase.

Austria currently administers three vaccines: Biontech/Pfizer, Moderna and AstraZeneca. Johnson and Johnson has been approved, however deliveries of the vaccine have been suspended by the manufacturer.

What does the Johnson and Johnson suspension mean for Austria’s vaccination rollout?

The Austrian Health Ministry addresses the matter directly, saying that due mainly to availability “a free choice may not be possible, similar to what we know from seasonal flu vaccines”.

The guidance does however point out that some vaccines are less likely to be administered by GPs due to the need to store them at incredibly cold temperatures.

While Moderna and Pfizer/Biontech need to be stored in special freezers, AstraZeneca and Johnson and Johnson do not.

In March, a member of the Health Ministry told Austria’s Die Presse newspaper that allowing people to select vaccines will not be possible for “several months” due to a lack of supply.

Officials do however believe that a choice of vaccine will be available at some point, unlike in some countries such as neighbouring Switzerland where authorities have ruled out allowing patients to choose at any point – even when supplies increase.

In Austria, you are told of which vaccine you will get after you make your appointment. This can alternate on a day-to-day basis.

While reports emerged of some people cancelling appointments when being offered a vaccine they didn’t want, some states have put in place rules which block or suspend people from rebooking a new appointment when they have cancelled one for “tactical reasons”.

What about doctors and health workers?

In February, it appeared that doctors and health workers had been given an option to choose the vaccine, according to a post on the website of the Austrian Medical Association (Österreichische Ärztekammer).

However, Medical Association president Thomas Szekeres told Austria’s Kurier newspaper that this was an error and that no member of the medical profession would be permitted to choose which vaccine to take.

Szekeres clarified that the post referred to the policy in place at that time which recommended AstraZeneca for under 65s only, indicating that people from different age groups may be given different vaccines.

“There was no choice, a different approach is only provided according to age. That means, depending on age, you can either get the AstraZeneca vaccine up to 65 or the vaccine from Pfizer over the age of 65,” he said.

According to the Vienna Medical Association, doctors and healthcare workers are not allowed to choose the vaccine “due to the limited availability of COVID-19 vaccines.”