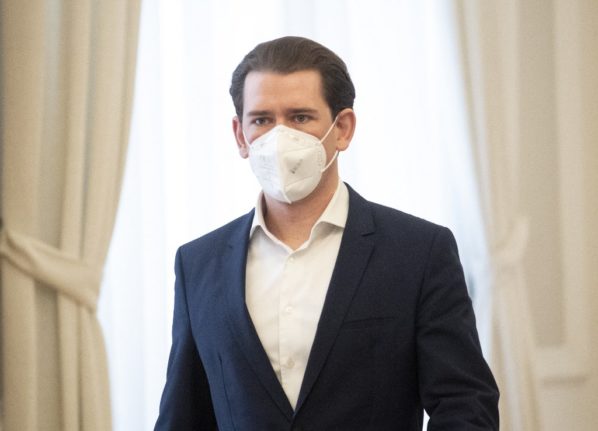 Austria’s traffic light commission has recommended expanding the lockdown in Vienna, Burgenland and Lower Austria to almost all other states.

All states other than Vorarlberg in Austria currently have a seven day incidence over 200 per 100,000 inhabitants, prompting the move.

MAPS: The numbers which show why eastern Austria will be locked down

Vorarlberg is the only state to remain orange despite the recent increase in the number of infections. Vienna has the highest number of infections (318.6). However the commission found Salzburg (299.6) was the worst affected state when it came to the risk-adjusted numbers of incidences, which factors in patient age.

Tyrol border controls to be lifted?

Germany is likely to lift border controls with Tyrol soon, according to the  Tiroler Tageszeitung newspaper. The decision depends on the evaluation of the German Robert Koch Institute, it reports. “It cannot be ruled out that … the entry ban will be over from Sunday,” writes the newspaper.

Vaccination ‘has not reduced death rate’ yet in wider population

The vaccination effect which has reduced the death rate in old people’s and nursing homes has not yet reached the broader population, broadcaster ORF reports.

More vaccines to help some EU countries catch up?

EU states have agreed on a compromise on vaccine distribution, with 10 million early vaccination doses to be distributed by the end of June. The extra doses are supposed to allow countries which have vaccinated fewer citizens to catch up.

However, the EU is undecided on how to divide up the extra doses, Der Standard reports. The move comes after a campaign by Austria, Bulgaria, Latvia, Slovenia, Croatia and the Czech Republic, all countries which did not  use all their allocation of Biontech/Pfizer or Johnson & Johnson, but relied heavily on AstraZeneca.

However, the German newspaper Der Spiegel says “seems rather unlikely” that Austria will receive more vaccine doses, as its vaccination campaign is not particularly behind.

Exit restrictions in place for Weiner Neustadt-Land and Neunkirchen

Exit controls began for two Lower Austrian districts at midnight on Thursday, meaning people will need to show a negative antigen or PCR test to leave the region. In both Wiener Neustadt-Land and Neunkirchen the seven day incidence value has been above 400 for days

Suspicions data was sold on by counterterrorism official in Austria

In an exclusive report, Die Presse  newspaper says investigators found dozens of cell phones in the apartment of a BVT (Office for the Protection of the Constitution and Counterterrorism) IT technician, some of them belonging to high-ranking employees of the Ministry of the Interior.

The technician is suspected of having read, passed on and sold the data. The public prosecutor’s office confirmed the investigation.

The western Austrian state of Tyrol is a stronghold for the centre-right party ÖVP, which also leads the governing coalition in the federal government. On Sunday, Austrian citizens went to the polls for the state parliament elections, forming new legislation – and putting their support on their favourite candidates.

Even though the ÖVP got most of the votes, it is far from getting a majority and will need to enter into a coalition to rule. The party got 34.71 percent of the votes, down by 9.55 percentage points from the previous elections and a significant setback for the blacks. However, this gives them 14 seats in parliament.

READ ALSO: EXPLAINED: How do Austrians elect their chancellor?

How does the election process work?

Tyrol, much like the Austrian federal government, has a parliamentary system. This means voters will choose the parties they want to have seats in the state parliament. So, for example, ÖVP will get about a third of the seats in the house.

The parties need a minimum percentage of votes to get representation in the parliament. Even though MFG, KPÖ and Mach Mit got votes, they have failed to elect representatives and gain seats in the state parliament.

READ ALSO: Austrian presidential elections: What exactly does the president do?

After the parliament is elected, its members then choose a governor. In practice, since the parties already run with a suggested government candidate, people who vote for them also know which person they elect for the executive position.

In the case of ÖVP, Anton Mattle, the 59-year-old career politician, was the party’s choice for the top state job. Had the party won more than 50 percent of the votes, they would be able to elect Mattle, the new governor, without discussing it with other parties.

But, since it didn’t, the ÖVP now will start talks with other parties looking to form a majority government and elect Mattle – plus ensure that by having a clear majority in the state parliament, they will be able to pass legislation.

What coalitions are possible?

Technically, any coalitions between two or more parties that lead to a majority in the state legislature are possible, even those without ÖVP. However, since the centre-right party got the most votes, it traditionally receives the right to try and form a government first.

Experts believe the most likely scenario is for a major coalition between the blacks and the reds, meaning the ÖVP and the SPÖ. They would have to discuss their main government proposals, the distribution of executive positions and other points to see if an ÖVP-SPÖ government is possible.

An ÖVP-FPÖ coalition could also technically have a majority, but Mattle had already rejected the idea of an agreement with only the far-right.

Additionally, ÖVP could look into a three-way coalition, bringing, for example, the Grüne and Fritz to the government.

So who will be the next governor?

It is most likely that Anton Mattle, from the ÖVP, will get the job. The only question is who his party will be ruling with.

He told Austrian media that the exploratory talks for a coalition agreement would start in the coming days.