Austria will this week decide whether or not lockdown will be extended. Here’s what you need to know.

Earlier in the month, Austrian authorities said the next steps in reopening – including allowing restaurants to open outdoor areas and removing some restrictions on sport – would take place from March 27th if infection rates remained low.

Amid a rise in new case numbers and a sharp decline in available hospital beds however, such relaxations seem unlikely.

The Local reported last week that coronavirus infections had hit a three-month high, putting a planned easing of lockdown restrictions on 27th March throughout the Alpine state in jeopardy.

What is the current infection situation in Austria?

The number of infections has been steadily climbing in Austria since lockdown measures were relaxed on February 8th.

The number of new coronavirus infections crossed the 3,000 mark on Friday, the first time since mid-December.

The situation is particularly severe in Vienna and Upper Austria, where 60 percent of the 373 occupied beds for coronavirus sufferers can be found.

“It looks like the number of occupied intensive care beds will be greater than in previous waves,” said Nina Brenner-Küng, spokesperson for the Vienna Health Association.

Non-ICU beds are also filling up – with 1,395 occupied as at Monday, an increase of 94 on the previous day’s figures. 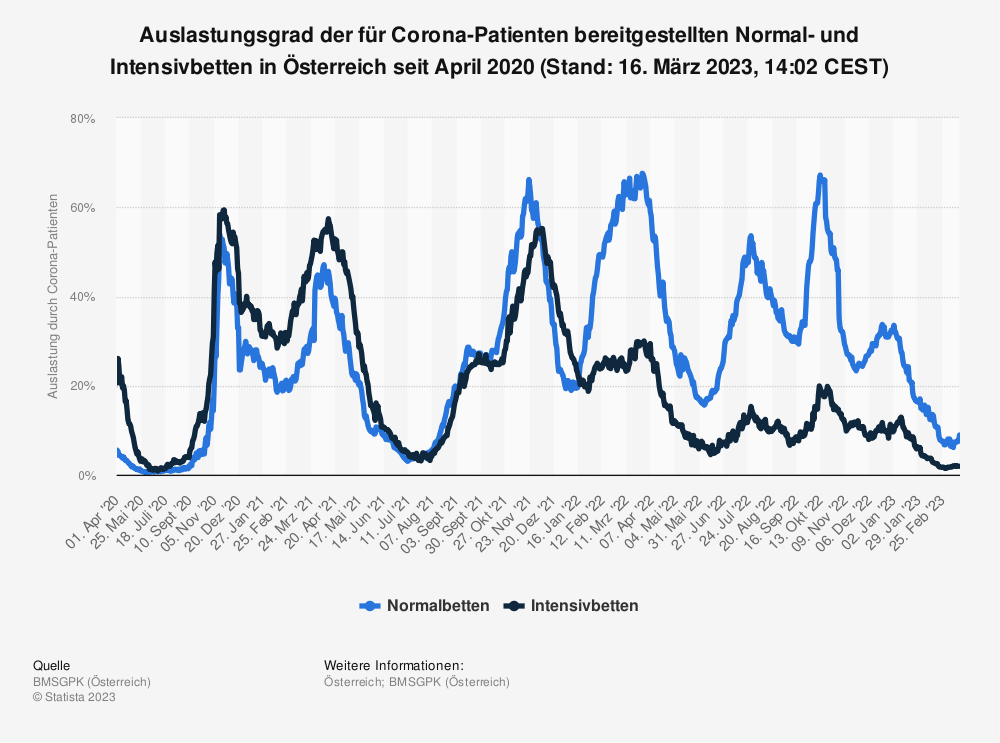 Why are intensive care and general hospital beds filling up?

Tyra Grove Krause, the technical director of the Danish Health Service Center, said “our numbers point in the same direction as several other studies from the UK showing that B.1.1.7 may cause more serious disease.”

Community testing tends to pick up more low risk cases, but the researchers said that if the findings were able to be generalised to other populations, the variant has the “potential to cause substantial additional mortality compared with previously circulating variants”.

Simon Clarke, Associate Professor in Cellular Microbiology at the University of Reading, said the increased lethality added to its faster spread meant that “this version of the virus presents a substantial challenge to healthcare systems and policy makers. “It also makes it even more important people get vaccinated when called,” he added.

What does it mean for the planned opening?

While it is impossible to know what will be decided before the Austrian government makes a final decision, Austrian media reports that a nationwide relaxation appears unlikely on March 27th.

The government takes into account a wide range of factors in making lockdown decisions, from infection rates to hospitalisations.

Kronen Zeitung reports that this is unlikely before mid-April, while Der Standard reports that regional rather than nation-wide relaxations are the probable course of action.

This has already taken place in Vorarlberg, where restaurants have been allowed to serve guests indoor and outdoor since March 15th.

According to the APA news agency, the government wants to “find tailor-made solutions for the affected regions”.

While details are at this stage relatively scarce, this could include allowing states to open up again as has happened in Vorarlberg, or particular regions or municipalities.