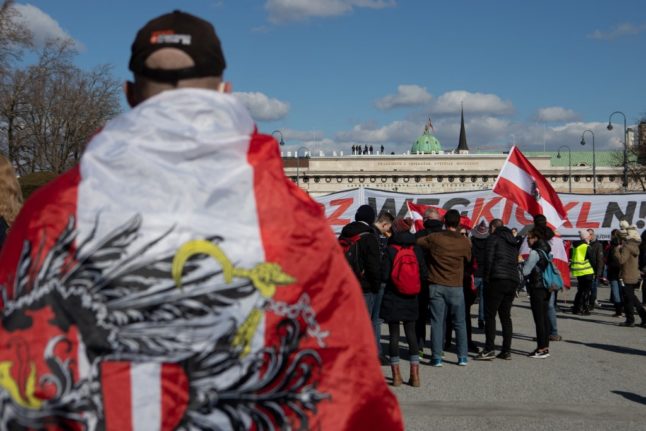 A demonstrator in Vienna on Saturday, March 6th. Photo: AFP

Many of the protesters did not wear masks or observe social distancing as they made their way through the centre of the Austrian capital to a park where the far-right Freedom Party (FPOe) had called a rally.

But the demonstrators voiced opposition to the restrictions still in place, including the closure of restaurants and cafes as well as the tests that school pupils must take to attend in-person lessons.

READ MORE: Austria to wind back some lockdown measures before Easter

“When measures are taken which lead to nearly a million people finding themselves unemployed or on furlough, then this destroys people economically, which will obviously have long-term consequences for families and for the children who live in them,” protester Christopher Pollack told AFP.

Former interior minister Herbert Kickl accused the government of “dancing on the edge of lunacy” in a speech to the crowd.

“It’s all so weird and mad, no Hollywood director could make it up,” Kickl said of the remaining restrictions.

Hostility to the media was in evidence with the chant “Luegenpresse” or “lying press” being used.

Isolated scuffles were reported between protesters and left-wing counter-demonstrators, with police using tear gas to separate them on at least one occasion.

Austrian media reported that extreme-right elements, including convicted neo-Nazi Gottfried Kuessel, were seen among the crowds, as they have been at previous anti-lockdown protests.

Police said that some of the arrests were made at the end of the protest when some participants refused to disperse.

Such demonstrations have been increasingly common in recent months as citizens chafe against the continuing restrictions on normal life and their economic impact.

The government has said the restrictions could be further eased in the coming weeks if infections decline. It has offered the prospect of restaurants and cafe gardens reopening at the end of March.

However, the number of new daily infections in Austria has been creeping upwards in recent weeks, with more than 2,500 new cases reported on Saturday.

Health Minister Rudolf Anschober said that the more infectious British variant of the virus was now the dominant variety in Austria and had achieved an “alarmingly” high reproduction factor of 1.23, higher than the original strain of the virus.