The EU's disease agency has launched a Covid-19 vaccine tracking tool, providing an overview of countries' efforts in the rollout of inoculations across Europe. It came as the EU Commission said it was shifting its strategy away from relying on the AstraZeneca vaccine.

The first set of data was available on the website of the European Centre for Disease Prevention and Control (ECDC), covering the 27-nation bloc plus Iceland, Liechtenstein and Norway.

As a result, the tracker indicated the number of vaccine doses administered in its member states as of Monday was 8.23 million, though in reality the number is much higher. 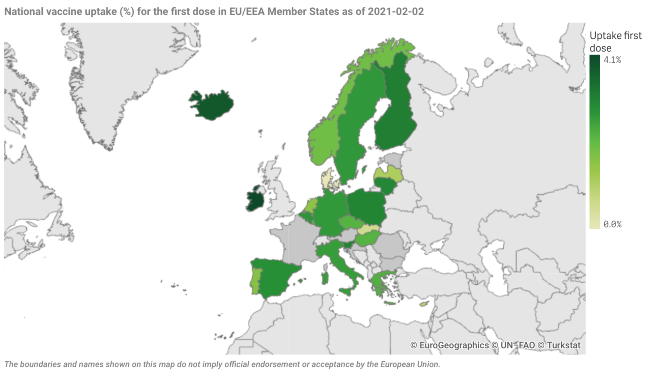 (Not all countries had uploaded their data as February 2nd. )

According to AFP's own database compiled from official sources, by 1600 GMT Monday, at least 12.6 million doses have been administered to 10.5 million people in the EU, representing 2.3 percent of the population.

“It also provides initial indicative estimates of vaccine uptake for the first and second dose per population targeted by vaccine recommendations on the national level.”

ECDC Director Andrea Ammon said: “It is with great pleasure that we launch the Vaccine Tracker that provides a near-live view on vaccination progress in Europe. Vaccination campaigns are not to be viewed merely as a race for the largest numbers at the quickest speed. As the rollout progresses, vaccination strategies will need to be flexible and adaptable.”

Move away from AstraZeneca

The European Commission indicated Monday that it is shifting its early Covid-19 vaccination strategy away from AstraZeneca after the Anglo-Swedish company fell far short in its delivery of doses.

The head of the Commission's health directorate, Sandra Gallina, told MEPs the firm has been able to guarantee just 25 percent of the more than 100 million doses promised and that this was “a real issue” for the EU's 27 countries.

“AstraZeneca was going to be the mass vaccine for quarter one,” she said, referring to the first three months of 2021. “The fact that AstraZeneca is not there in the quantities that were stipulated in the contract is quite problematic for all member states.”

Galina added that the Commission was now looking to the vaccines made by BioNTech/Pfizer and Johnson & Johnson to fill the gap.

She noted that the new mRNA technology used in the BioNTech/Pfizer vaccine and a similar one by Moderna had shown “impressive” efficacy levels of over 90 percent in immunising against Covid.

AstraZeneca, which uses the adenovirus technique, has 60 percent efficacy, according to clinical data parsed by the European Medicines Agency.

Gallina said production of the BioNTech/Pfizer doses could be ramped up using other pharmaceutical companies' facilities, for instance ones offered by French company Sanofi, whose own vaccine bid has hit obstacles.

“Manufacturing is really the moment when we have a problem of constraint for the vaccines,” Gallina said.