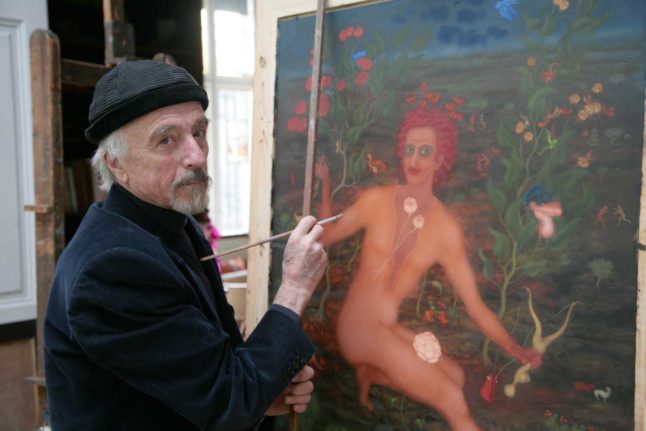 Brauer — whose prolific output included work as a painter, graphic designer and singer-songwriter — died on Sunday night surrounded by his family.

According to a statement from his family, Brauer's last words were: “I was happy with my wife, with my family, with my art and my Vienna Woods.”

Born in Vienna in 1929 into a Russian-Jewish family, his childhood was thrown into turmoil when the Nazis annexed Austria in 1938.

While his father was killed in a concentration camp, Brauer survived in Vienna, partly through hiding his mandatory Star of David badge.

During the November 1938 Kristallnacht pogrom, he was hidden by the caretaker at his shoemaker father's workshop.

In Austria, the two days of anti-Jewish violence led to the deaths of least 30 people, the imprisonment of 7,800 more and the deportation of 4,000 to the Dachau concentration camp.

After the war Brauer studied at the Academy of Fine Arts in Vienna before moving to Paris with his wife, Naomi, where the pair made a living as singers.

Returning to Vienna in the mid-1960s, he became a prominent representative of the city's Fantastic Realism art movement.

In Austria, he was also a highly regarded musician, who wrote and sung in Viennese dialect.

Apart from painting and singing, he also worked as an architect, a graphic designer, and as a stage designer for the Paris Opera.

Brauer resided in Austria and Israel, and received many awards and prizes, not just for his art, but also for his stance on democracy and his defence of human rights.

In one of his last interviews in November with German weekly Die Zeit, when asked if he could imagine not working as an artist, Brauer replied: “That I can only imagine when I don't exist any longer, and then I'll be working harder than ever.”