The new residency process for British citizens in Austria is now being rolled out across the country, but in some regions Britons are facing delays.

The first applications for the Article 50 EUV Card (the new residency permit) started being processed on 4 January and in Vienna more than 500 applications have already been submitted.
But in Tyrol, Salzburg, Vorarlberg and Styria, delays to the roll out are being reported due to the coronavirus lockdown and uncertainty surrounding the new system.
One British man living in Graz, Styria, who asked not to be identified, said: “The Bezirkshauptmannschaft [District Administration] said they don’t have anything set up yet and to phone back in a month. They also said there is no need to attend in person because of COVID. All I can do is wait now.”
A British woman living in Innsbruck, Tyrol, who also asked not to be identified, has experienced a similar situation after contacting the authorities by email to enquire about starting the application process.
READ MORE: How Britons in Austria can secure post-Brexit residency
She said: “I received a prompt reply that said I didn’t need an appointment, but since they were still trying to clarify a few things about the cards it was best to wait until later in January.
“I was happy with their answer and their honesty about wanting to understand the process before people go in. I have shared this information with the British in Austria Facebook group.”
However, in Kitzbühel, Tyrol, the District Administration has confirmed that it is possible to book appointments to facilitate the application process.
British citizens in Austria have until 31 December 2021 to submit the application. The original deadline was extended by six months following a request from the British Embassy last year.
British Ambassador to Austria Leigh Turner said: “Before 31 December 2020, we were under the impression that the application process would open Austria-wide from 4 January 2021.
“In particular, we had a number of meetings with the Ministry of Interior where we emphasised the importance of this step. We are concerned to discover that for some British people in different parts of Austria that’s not the case.
“I’m cautiously optimistic that now the Ministry of Interior is engaged it will be sorted out but we’re also watching it carefully.”
When asked about the reasons for the delay in some parts of the country, Ambassador Turner said they are receiving differing reports but the Ministry of Interior has confirmed that some regional offices were not facilitating physical appointments due to COVID restrictions.
This applies to Lower Austria where UK nationals are being asked to submit documents by either post or email.
Applicants will then receive a confirmation letter and be invited to an appointment to provide fingerprints when restrictions have eased.
Ambassador Turner said: “In Tyrol, applications are going ahead and according to the Ministry they had already ordered 10 to 15 cards. However, UK nationals who were calling the Tyrolean government were being advised that if it wasn’t urgent they should wait until the COVID situation had improved.”
With regards to concerns around the charging guidelines, he said: “If you have permanent residency documents, you should be able to exchange it for the Article 50 EUV Card without a fee. Some people are also charged €14.30 as a stamping fee, but that’s a general processing charge mandated by Austrian law.
“If people are experiencing unreasonable delays anywhere, please let us know so we can take it up with the Austrian authorities.
“We’re very conscious that in the UK we’ve granted 4.4 million people with the right to remain, including 17,000 Austrians. The instruction in the UK has been to find reasons to grant the right to remain and not reasons to not grant it. We hope it will be the same case here.”
Graham Crewe, from the British in Austria group, lives in Salzburg and said he has started the application process but it is progressing slowly.
He said: “I was told that I could submit my documents by email this week, which I did. But then I received an email telling me they can’t process my application because they are still waiting for information from the Ministry [of the Interior].
When asked about the delays being experienced by some people, he said: “British in Austria have been very impressed with the work of the Ministry of the Interior and we have had tremendous feedback about how those appointments which have taken place have gone. 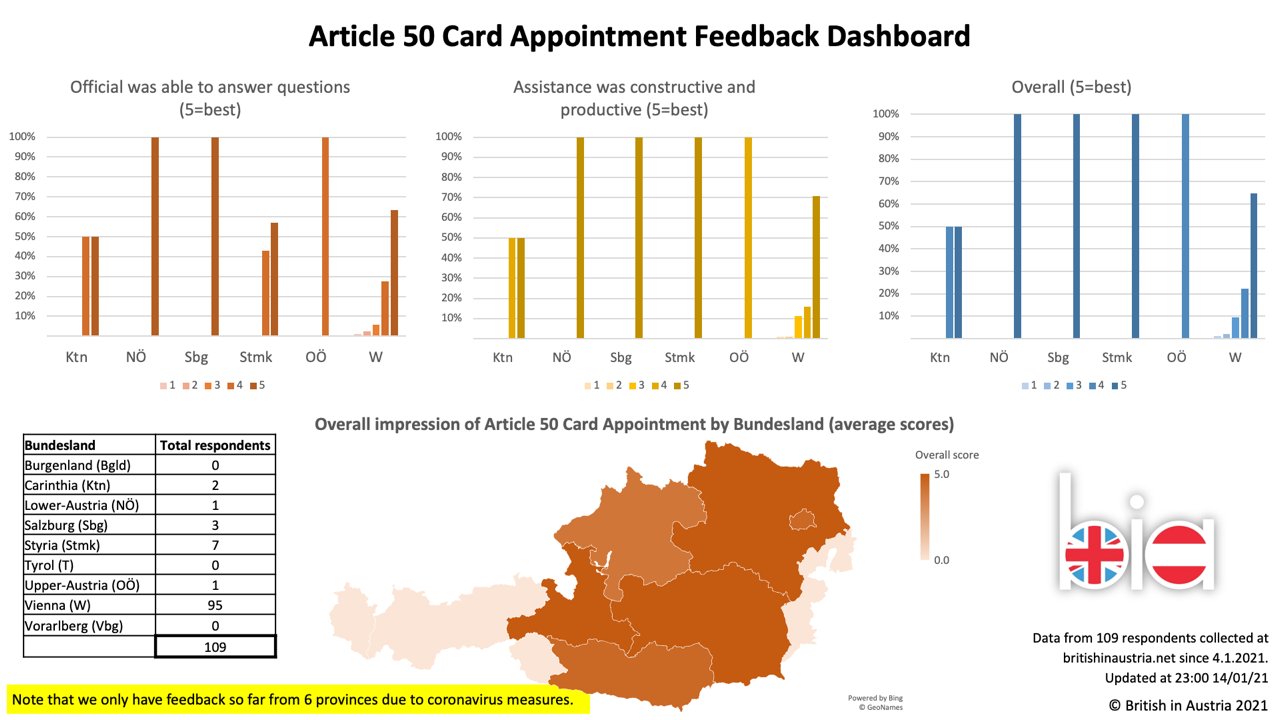 “But there is clearly work to do in ensuring that everybody in local government, as well as employers, understand the current rules.”
British in Austria is running a feedback form on its website to keep track of people’s experience and so far they are receiving mainly positive responses (see graphic above).
Graham said: “The average overall score is 4.67. Admittedly, 95 of these respondents were in Vienna, so we don’t yet have a complete picture from around the provinces, but early signs are that it is going well everywhere where they are conducting face-to-face appointments.”
Anyone that experiences unreasonable delays to their application process is urged to contact the British Embassy at [email protected]