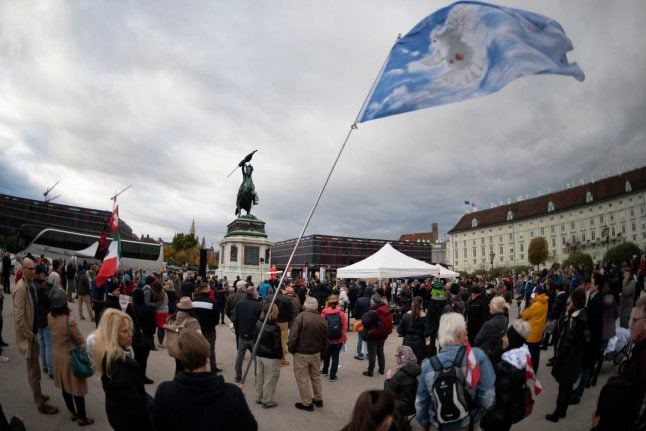 A file photo of a coronavirus protest in Vienna from October 2020. Photo: JOE KLAMAR / AFP

Police reported the presence of “extremists and radicals” elements at one such gathering, a feature of previous demonstrations that is increasingly worrying the authorities.

Austria is currently in its third coronavirus lockdown, which is scheduled to end on January 24.

The biggest demonstration on Wednesday saw 2,500 people gather in the town of Wiener Neustadt, according to police, who arrested several people for breaches of anti-coronavirus measures.

Police also said they had to intervene because “a group of extremists and radicals were causing a disturbance”. The group in question was of an “anti-democratic” tendency, they added.

About a thousand protesters gathered in the town of Amstetten and 500 in the southern town of Judenburg.

Smaller protests — some billed as “walks” in order to evade virus-related curbs on gatherings — were reported in several other cities and towns in different parts of the country.

The presence of extremist elements in some of the protests has caused alarm and pushed authorities to announce tighter surveillance of such events.

In the town of Braunau am Inn on Saturday, about 50 protesters stopped to pose for a photo in front of the house where Adolf Hitler was born.

Local police say several of them are now being investigated for having allegedly raised their arms in Nazi salutes.

The interior ministry said Tuesday it was preparing guidelines for tougher action against such events where necessary.

“The far-right calls for the demonstrations, they push them and use the corona cloak to spread their ideologies,” interior ministry spokesman Harald Soeroes told AFP on Tuesday.

“That's no longer about freedom of expression, that's re-engagement” in National Socialist activities, a crime under Austrian law, Soeroes said.

Local authorities would be advised to prohibit demonstrations “when there is evidence that radical elements known to authorities will participate, that banners with right-wing extremist messages will be shown,” he added.

The exact motivations and demands of the protestors are often difficult to pin down, but frustration at the repeated lockdowns as well as opposition to mask-wearing and vaccinations are common themes.

On Sunday in the capital Vienna, about 2,000 protesters gathered for one protest rally.