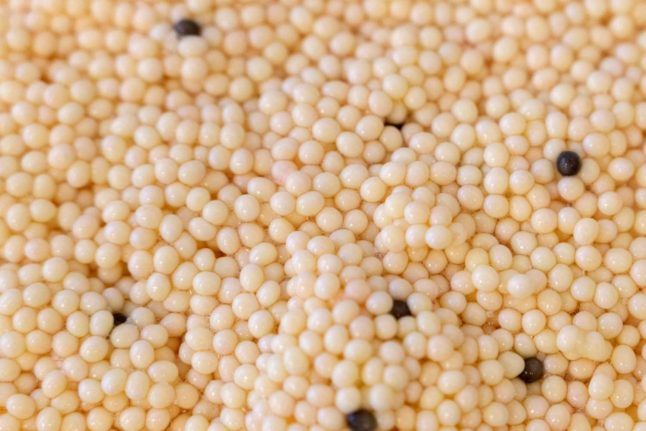 As close as you can get to white caviar without your eyes getting wet. Photo: JOE KLAMAR / AFP

In his waders, Stefan Astner checks on the albino sturgeon: Almost two decades after they hatched, they're ready to be gutted for their caviar to be shipped out for New Year's celebrations.

“The fish have already been through the ultrasound so we saw that they are full (of roe) and they will go into production soon,” Astner says, dipping his net into a small pond teeming with the rare, white sturgeon.

Deemed the most expensive food in the world, demand for caviar — essentially, salted roe — has driven most sturgeon species to the brink of extinction in the wild. But fish farms like the one where Astner works in the village of Groedig, near the Austrian city of Salzburg, offer a more sustainable alternative.

Owner Walter Gruell is one of about 2,500 sturgeon farmers worldwide that produce a combined 415 tonnes of caviar a year, according to the World Sturgeon Conservation Society's most recent figures dating from 2018. But patience is imperative for producers.

The required investment is high and doesn't pay off for years until the sturgeon begin carrying roe — that's if they aren't stolen by gangs hoping to skip the arduous breeding process.

The albino female that Gruell slices with surgical precision is 16 years old. Slowly, he removes, rinses, and weighs the cream-coloured roe, which, like the fish, lacks pigmentation.

There are no more than 40 sturgeon breeders specialising in albinos worldwide, according to Thomas Friedrich, an expert on sturgeon at the University of Natural Resources and Life Sciences in Vienna.

Though there's no research suggesting that lack of pigmentation affects caviar's taste, Gruell is convinced of its superiority, asserting that “it's even sweeter, even smoother than the traditionally black one.”

Consumers are willing to pay for the difference. A rare albino sturgeon in a farm outside Salzburg. Photo: JOE KLAMAR / AFP

The coronavirus pandemic has curbed demand as upscale restaurants, like all eateries in Austria, have been closed, but retail is booming, partly because people still want to treat themselves, Gruell believes.

“People want to savour the present moment,” he says, between the many phone calls ahead of the end-of-year celebrations, when he makes close to 40 percent of his annual turnover.

While AFP visited his farm, Gruell spoke to a luxury automaker, and shortly before had been in contact with an airline hoping to serve first-class travellers caviar “Made in Austria”.

Demand for caviar remains high, and not just from paying customers, but sturgeon rustlers, too.

A year ago, 400 kilos of sturgeon were stolen from a farm less than two hours away from Groedig.

The eviscerated fish were later found in a reservoir.

A year before that, 400 individual sturgeon worth 50,000 euros were stolen from another farm.

At Gruell's farm, the fish, which include sturgeon native to the Danube, are protected by surveillance cameras and high fences with heavy padlocks. A rare albino sturgeon in a farm outside Salzburg. Photo: JOE KLAMAR / AFP

Though sturgeon breeding in countries like China, Italy and France started as a purely financial venture, it is now also seen as a sustainable alternative to wild sturgeon.

Having survived the demise of the dinosaurs, some sturgeon species have recently gone extinct, while others are on the brink.

In Russia and Iran, production of wild caviar collapsed in the 1980s due to overfishing as well as pollution in the Caspian Sea.

Most countries along the Danube now protect the local sturgeon species, though experts worry that conservation might have come too late.

Official government data in Romania, where the Danube empties into the Black Sea, show that catches of Russian sturgeon plummeted from 3,725 kilos (8,214 pounds) in 2002 to just 37 kilos (82 pounds) in 2005, indicating that overfishing had gravely diminished their numbers.

Though the country issued a moratorium in 2006, impoverished fishermen continue to try and catch the fish, as the dozens of kilos of roe that one sturgeon can carry are worth as much as a fisherman's annual income.

Some fans of the delicacy still believe that the taste of wild caviar eclipses that extracted from farmed sturgeon — though Gruell says his albinos are in a taste category of their own.