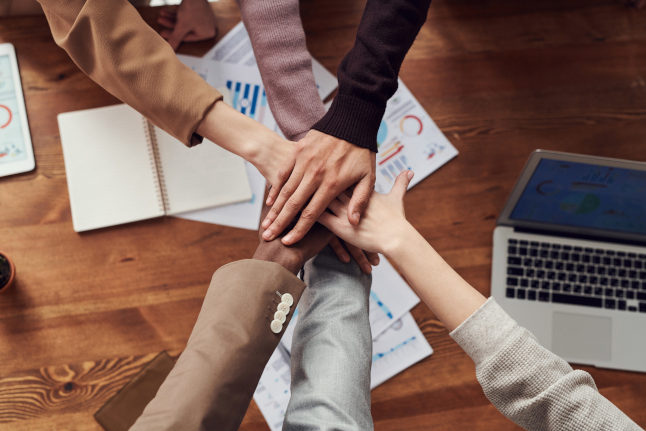 This article is part of Changing the Narrative. Articles in this series are written by student or early career journalists who took part in The Local's training course on solutions-focused migration reporting. Find out more about the project here.

In 2016 the UK government set up the Community Sponsorship Scheme (CSS), with the aim of offering refugees a safe and legal route for entering the UK, improving their chances of settling in and learning English and ultimately finding work. Over 150 community groups across the UK have now welcomed and provided support to more than 400 Syrian refugees as they attempted to rebuild their lives in an alien new environment.

Under the scheme, arriving families are welcomed at the airport by members of their sponsorship team and escorted to their new home where a hot meal and well stocked fridge awaits them. Their home will have been thoughtfully furnished with consideration given to the family's cultural/religious needs and will include items such as net curtains and a shoe rack.

Meeting the family for the first time is the culmination of around a year's work by the sponsor group whose obligations include sourcing suitable affordable housing for the family and raising £9,000 through fundraising to cover costs, including furnishing the house, paying for translations and providing English lessons.

The refugee family receive ongoing support, encouragement and practical assistance for one year to ease their settling in and integration into the community. The sponsor group's 'local experts' are on hand to help the family in applying for benefits, accessing health services and enrolling their children into schools.

The sponsors tap into their wider network to help the refugees secure employment in the community and meet the ultimate goal of the families becoming financially independent. The 'local experts' also advise and inform the sponsored family on day-to-day matters such as local public transport and refuse collection arrangements.

MORE IN THIS SERIES:

Sean Ryan who was awarded an MBE for his efforts in refugee resettlement told me how his team from the Manchester parish of St Monica's, Flixton, pre-empted Pope Francis' 2015 call for every European Parish to take in one refugee family and became the UK's first grassroots community team to welcome a refugee family in 2016.

Sean's team welcomed the Hamwyeh family made up of Samir, his wife Fadya and their children. Prior to their arrival in the UK, the Syrian family had endured four years of destitution in Lebanon. Not long after the family's arrival in Manchester, Samir began to volunteer to cook for a charity which supports homeless asylum seekers.

Two and a half years after his arrival in the UK, Samir described how his team of community sponsors had helped him to realise his dream of opening and running a Middle Eastern restaurant in Manchester.

A post shared by Reset Communities and Refugees (@resetukorg)

Sean explained how welcoming refugee families also had a positive impact on the local community. He believes that by giving sponsors ownership of their project, it strengthens existing relationships, leads to the development of new ones and harmonises interfaith relationships, which results in greater connectivity in the community and opens new doors to a wider network.

Sean described the challenges as: the need to balance the needs of the UK with the needs of the refugees, finding affordable housing, providing sufficient intensive English language training and securing employment. He explained that most of the new arrivals are significantly traumatised and require a team of around 25 people to provide love and support during their resettlement.

The community sponsorship group is normally made up of a project leader, a safeguarding leader, a chairperson and secretary. Sub-groups take care of different aspects such as finances (fundraising, budgeting/disbursing raised funds and later helping the family to manage their own budget).

An accommodation group is tasked with sourcing and furnishing the family's new home and a family welfare team are formed to take care of health and well-being, befriending and orientation. A couple of volunteer interpreters are also needed within the group.

Sean utilised his knowledge and insight to help shape the government's Community Sponsorship Scheme and has inspired 62 further parishes to become involved.

A post shared by Reset Communities and Refugees (@resetukorg)

Hannah Feldman, Senior Project Manager at Sponsor Refugees cited the stories of several Syrian refugees who have gone on to “give back” back to the communities. Among those are Khaled who is now a key NHS worker and Sam who has gone on to assist the group that welcomed his family into the local community by supporting new arrivals.

Hannah told me that the scheme had been successful in areas as diverse as London, Wales and Devon. In some rural areas, lack of English language learning provisions had proved to be a challenge and made it difficult for the refugees to obtain driving licences due to the theory test being in English or Welsh.

One refugee who overcame this challenge was Abdulla who passed his driving test within a year of arriving in the UK but for new arrivals with a lower level of education who may even be illiterate in their own language, the challenge is even greater.

Hannah said that support often continues unofficially after the one year commitment and she wasn't aware of any breakdowns between a family and its community group. Her greatest frustration has been the bureaucracy involved which means that it usually takes an entire year from submission of a sponsorship application to the family's arrival.

Hannah is currently campaigning to change the home office's concept of a family as their current policy means that refugees often have to leave behind family members, including children over 18.

In 2018 the UK government launched RESET in recognition of the need for 'a man in the middle' to grow the CSS programme, make it more accessible to potential sponsor groups and enable as many communities as possible to welcome refugees.

RESET offers training and support for both sponsors and sponsored refugees, gives advice to local authorities and lead sponsors and conducts research to better understand how Community Sponsorship works most effectively for both arriving refugees and their host communities.

Carly Whyborn, RESET's Head of Operations described the process as transformational for the sponsor groups as well as the refugees. She attributed the beauty of the scheme to how it enabled locals to share their neighbourhood expertise and locality's unique quirks, to provide valuable information and guidance on matters such as refuse collection methods/days and the area's public transport.

She said that meaningful relationships often developed between the refugees and their host communities and that new friendships were frequently formed between sponsors within a group.

Carly acknowledged that the expectations of the sponsors and the refugees needed to be managed, as did cultural issues on both sides. She revealed that integration isn't always completely smooth but also questioned how 'integration' could be defined.

But some of the main challenges, she said, included that the families' small budget made it difficult for them to manage finances, and that some found that their accommodation was different to their expectations and the homes they were used to in their own countries. Another challenge found by refugees in some areas was the difficulty and/or expense in purchasing halal food due to a lack of halal shops in the area. A 'Refugees Welcome' march in London in 2016. Photo: Daniel Leal-Olivas/AFP

Retired teacher Sharon Carter is a member of the Welsh Croeso Teifi CSS group which has already welcomed two Syrian families. The children have settled well into school and are learning to speak Welsh and English as well as their native Arabic language, she said, and the men from both families had passed their theory driving test. One of these men is now working part-time as a barber and the second has secured employment with a local builder.

Ahmed and Ines who were welcomed to a small coastal town in Wales under the CSS wanted to give back to the community who had helped them through their own catastrophe and have been cooking meals for a local care home during the Covid crisis.

Sharon said that she found the scheme greatly rewarding and it had changed her life as well as benefiting the sponsorship group and the wider Welsh community who had provided huge support to the sponsors.

The Croeso Teifi CSS engaged in high-profile fundraising and formed good relationships with the wider community in order to raise awareness of their objective and avoid potential problems caused by negative media. They also engaged with personnel in the local bank, job centre and medical community as well as going into local schools to prepare the children for their new Syrian classmates.

A 2020 study by Birmingham University examined the effect of community sponsorship and concluded that overall it had a positive impact on the participating areas. It was found that locals who had direct contact with the refugees benefited on emotional and intellectual levels.

A second report compiled by the Institute for Research into Superdiversity which evaluated Community Sponsorship in the UK from 2017-2020 cited a range of challenges faced by Syrian refugees and their support groups. These included language difficulties, securing jobs, raising children in a new country, wellbeing, racism and coping with cultural differences.

Julie Al-Zoubi is a freelance journalist based in the UK. She is a regular contributor to Olive Oil Times.