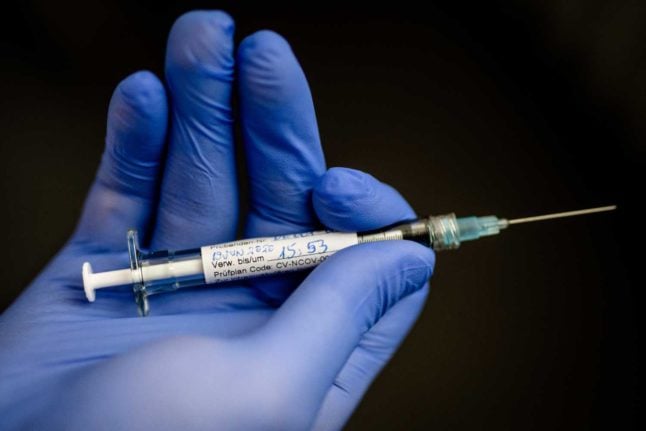 Austria will start a three-stage rollout of the coronavirus vaccine from January 2021.

Austrian health authorities revealed the details of the three-stage plan at a press conference on Tuesday.

Austrian Health Minister Rudolf Anschober said on Tuesday morning that the scheme has an ultimate goal of vaccinating “well over 50 percent” of the population by the end of summer 2021.

While further details are set to be debated on Wednesday in cabinet, the federal authorities gave an overview of how the plan is likely to work – and who will be vaccinated first.

A strategy paper leaked to Austrian tabloid Kronen Zeitung said that the “procurement of sufficient vaccines for eight million people” has been guaranteed.

When will the vaccinations take place?

The vaccinations will come in three waves from January.

Phase one, which is set to kick off in January of 2021, will target people over the age of 65, “especially those in retirement and old age homes”.

Phase one will also see staff in nursing homes vaccinated.

It is expected to start in February and March of 2021.

Other people in so-called “systemically relevant” professions will also be vaccinated as part of this phase.

More information on the individual phases is available here.

Why does the vaccine need to be delivered in phases?

The reason that the vaccine is to be delivered in phases is due to difficulties acquiring the necessary doses, along with a desire to protect the most vulnerable while allowing the economy to gradually reopen.

Setting up the infrastructure – along with simply acquiring the necessary doses amid an unprecedented worldwide demand – takes time.

Fortunately, some of the infrastructure will already be in place as Austria plans to use the framework set up for the country’s mass-testing scheme.

State and local governments are crucial in this phase as they will be required to help set up the infrastructure to deliver the vaccines.

The federal government will be responsible for logistics and for cooperating with pharmaceutical wholesalers, Der Standard reports.

What does it mean for the coronavirus lockdown measures?

Unfortunately, the announcement of the vaccine does not mean an end to the ongoing shutdown rules.

As indicated by Anschober on Tuesday, the bad news is that some form of coronavirus hygiene, social distancing and perhaps shutdown measures are likely to remain in place until at least mid-2021 when more than 50 percent of the population receives the vaccine.

Austria’s government has made €200 million available for the vaccination scheme.

The vaccine is set to be free for all members of the public.

Which vaccine will be available in Austria?

So far, two vaccines – produced by Pfizer/BioNTech and Moderna – have made it largely through the approval stages, while a third from AstraZeneca is almost there, while a number of others are in development.

However, the specific vaccine will be determined on the basis of availability, Anschober said at a press conference on Tuesday.

Will it be voluntary?

The vaccine will be voluntary so nobody will be forced to take it.

This has been a priority of Health Minister Anschober since the development process began, reports Kurier.

“With mass tests as with vaccinations, we strive to be voluntary,” Anschober said.

However, there is the possibility that the vaccine may be indirectly obligatory – i.e. required for people in particular professions.

Who is responsible for the plan?

Like all European Union member states, the plan is in effect overseen by both Austria and the EU.

The EU as the world’s largest collective market has sought about negotiating lower prices with pharmaceutical companies in order to get dosages for the entire continent.

The EU has made 2.7 billion euros available to procure the vaccine.

Individual member states are then given a specific allocation.

The European Union has allocated Austria an expected 24 million doses of the coronavirus vaccine.

Each person will need to be vaccinated twice, with people to receive both doses within a 14-day period.