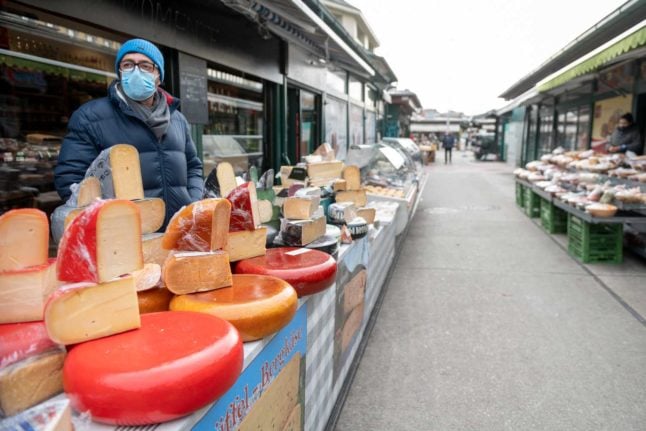 While it might not be a major win – more than 3,000 infections is still significant, while 71 deaths were also recorded across the country on Monday – but it is some indication that the measures to curb the spread are working.

Anschober welcomed the news cautiously, saying the measures were “slowly starting to have an effect”, although he warned that figures were always lower on a Monday due to the way reporting is done over the weekend.

He appealed to the population to “avoid any contact which is not required”.

'Lockdown must not be extended': Austria earmarks date to wind back measures

Sunday, November 22nd, marked the first time since late October that the number of patients in intensive care in Austria decreased.

As can be seen in the following chart, intensive care bed occupancy has risen every day since October 25th.

Herwig Ostermann, Managing Director of Health Austria (GÖG), said on Monday that the signs in the intensive care rooms were “quite positive”.

If the rate is above 1, it means that each person who is infected with the virus infects another person on average.

As high as 1.46 on the 31st of October, the declining figure gives hope that the measures are working.

Austria has set a goal of 0.8 to consider reopening many of the parts of the economy hit by the lockdown.

33 percent. That’s how much of Austria’s strict lockdown has passed so far, with officials hoping to end the lockdown on December 7th.

In a press conference on Monday, November 23rd, Austrian Health Minister Rudolf Anschober indicated that lockdown measures would be relaxed gradually, with schools likely to return to normal.

READ: How Austria plans to emerge from the coronavirus lockdown =

That’s the number of doses of coronavirus vaccine Austria will receive from the European Union.

Each person will need to be vaccinated twice, with people to receive both doses within a 14-day period.

The first vaccinations are expected to start in the last week of December or the first week of January.

“It is clear that the main risk groups have priority. In a second step, the employees of the health system should then be able to be vaccinated,” said Anschober in an interview with Kurier on Saturday.

The vaccination strategy and logistics are “de facto finished”.

On Monday, Anschober told Der Standard he expected hundreds of thousands of vaccinations to be carried out in January “unless something unbelievable goes wrong”.

That’s the number of coronavirus tests ordered by the Austrian government as part of its ‘mass testing’ plan, which will kick off on December 5th.

Saturday, December 5th and Sunday, December 6th, all state and federal teachers and kindergarten supervisors will be tested.

On December 7th and 8th, 40,000 police officers will be tested across the country.

According to Austrian newspaper Kronen Zeitung, “a broad series of tests is planned for the entire population before Christmas”.

Participation in the scheme is voluntary.

The testing will take place at around 100 testing stations which will be set up across the country.

The tests for teachers will be carried out by the Austrian Education Ministry through each state department, while the police testing will be conducted by each state’s police department.

Medical staff will be trained by Austrian health authorities and the Austrian military.