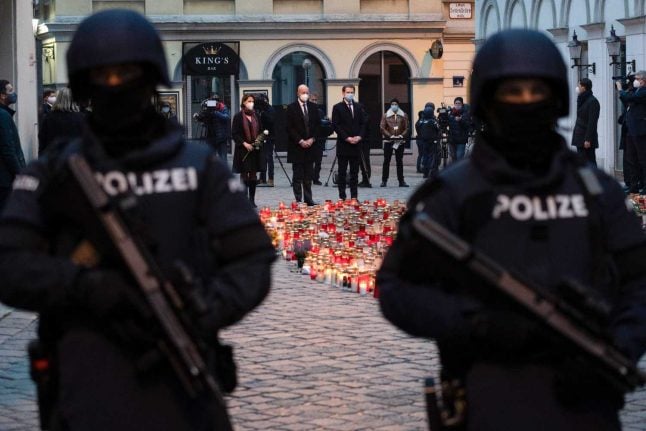 Even if people have served their sentences for terror offences, but are not yet seen as being completely deradicalised, “we will make it possible to lock those people up in order to protect the public,” Kurz told a news conference after a cabinet meeting.

In some cases, people who have just been released will be monitored with an electronic ankle bracelet or a wristband, Kurz said, without explaining exactly when this particular method would be used or when preventive detention would be applied.

The measures are part of a package to be put to MPs for approval in December.

“It is a strong intervention, but, from my point of view, a necessary step to minimise the threat to our population,” Kurz said, calling people like the Austrian-Macedonian dual national who killed four people last week “ticking time bombs.”

Kurz also said there were plans to strip dual citizens convicted of terrorism offences of their Austrian citizenship. The Vienna attacker had been jailed for trying to travel to Syria to join the Islamic State and was released early on condition he take part in a deradicalisation programme.

People convicted of terror-related offences could also be stripped of welfare benefits and have their driving licence taken away from them, Kurz said.

In July, Slovakian intelligence warned their Austrian counterparts that the Vienna attacker had attempted to buy ammunition, but no action was taken.

Similarly, the Austrian intelligence services did nothing after the attacker took part in a meeting with Islamists known to the German security services.

Authorities say the 20-year-old man, who was killed by police, was partially radicalised in a mosque and an Islamic association in Vienna, both of which were shut down last week.

Kurz also said the government plans to simplify the process of shutting down associations or mosques deemed to play a role in radicalisation and enable the public to report potential jihadist activities on an online platform. A central register of imams will also be created.

The Green party, now in coalition with Kurz's People's Party (OeVP), had previously criticised the concept of preventive detention while in opposition.

Around 150 individuals who have attempted or succeeded in joining the Islamic State in Syria or Iraq have now returned to the small country of fewer than nine million inhabitants.

On Monday, close to 1,000 police and intelligence service officers raided homes, businesses and associations allegedly tied to the Muslim Brotherhood and Hamas, seizing millions of euros in cash across four provinces.

Prosecutors insisted that those raids were not connected to the attack last week but were the result of an investigation stretching back more than a year.