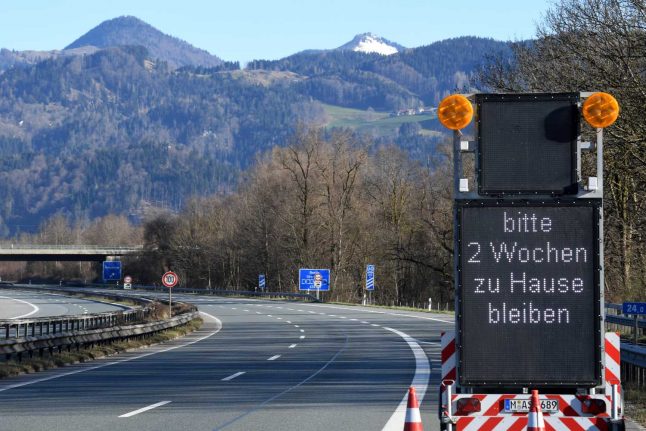 A sign reads 'please stay home for two weeks'. Will Austria enter a lockdown?Photo: Christof STACHE / AFP
The Austrian government met on Thursday to discuss the implementation of stricter measures as new infections in the country continue to skyrocket.
The proposed new measures are set to be announced on Saturday, October 30th.

Chancellor Sebastian Kurz, Vice Chancellor Werner Kogler and Health Minister Rudolf Anschober along with a number of health experts met on Thursday afternoon to discuss implementing new measures to curb the spread of the virus.

While the government has refused to rule out putting in place a ‘lockdown light’ similar to that adopted in Germany, Austrian media reports that the most likely option on the table is a nighttime curfew.

On Thursday, 4,453 new infections were recorded across the country – the first time since the start of the pandemic when more than 4,000 cases have been recorded in a 24-hour period.

A total of 29 deaths were recorded across the country from Wednesday to Thursday.

‘Lockdown light’ or a nighttime curfew could be on the way

A range of lockdown measures have been put on the table at Thursday’s meeting.

MAPS: How many patients are in intensive care where you live in Austria?

As reported in The Local on Wednesday, the crucial metric which the government takes into account in deciding upon further lockdown measures is not case numbers, but hospitalisation rates.

Austrian media reports that one option being considered is a ‘lockdown light’ similar to that adopted in Germany, which would involve the closure of bars, restaurants, gyms and entertainment venues for a set period of time.

Schools and daycare centres remain open in Germany. The German measures will come into force on Monday, November 2nd, and will remain for the rest of the month.

Another possibility is a restriction on movements night.

While few details have emerged about the applicable times and duration of the nighttime curfew, Kurier reports that people would be restricted to their homes at nighttime unless they had a valid reason for leaving.

“In any case, leaving the apartment would be permissible in emergencies, to look after people in need and children, to go shopping (“covering basic needs”), for professional purposes and in general for physical and mental relaxation outdoors,” Kurier reports.

The curfew would likely remain for a ten-day period.

Please stay tuned to The Local Austria for everything you need to know about the announcement.