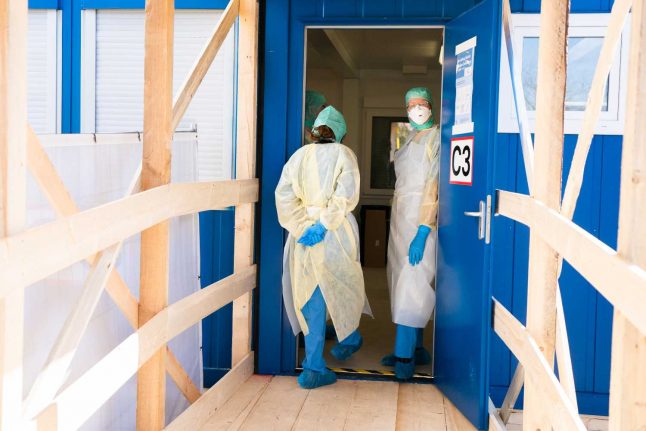 Authorities say the clock is ticking until the country exhausts its ICU capacity. The consequence of doing so would be a spike in “preventable deaths”, says Austrian intensive care representative body ÖGARI.

After a 40 percent increase in the number of patients in intensive care in Austria, beds are currently at 24 percent capacity.

According to Austria’s Health Minister Rudolf Anschober, an occupancy rate of 60 to 70 percent would be critical.

The Minister said the capacities of ICU facilities were currently the most important instrument in controlling the virus.

Austrian Chancellor Sebastian Kurz said on Tuesday that hospitalisation rates would be the key factor in deciding whether to pursue another lockdown.

Currently, 203 ICU beds were being used in Austria. At the peak in spring, the occupancy was 288.

The Austrian Health Department has forecast that 243 intensive care beds will be utilised by November 4th – although this would be at a rate of five new ICU admissions per day, lower than the current rate of eight per day.

Kurier reports that unless infections – and hospitalisations – decline dramatically, there will be an increase in the 'preventable death rate'.

“Since the beginning of September the corresponding values ​​have increased almost tenfold – a trend reversal is not in sight,” ÖGARI said in a statement.

“Experts in intensive care medicine cannot understand that, in view of the increasing number of infections and such rates of increase, there is still occasional talk of a relaxed situation with regard to intensive care.

“Even in well-equipped health systems like Austria’s, the routine degree of utilisation of the intensive resources – without the additional burden of the pandemic – was deliberately very high and no large “reserve capacities” were neither personnel nor structurally economically justifiable.

“Maybe not everyone is aware of that. “

Situation more serious in some states

The occupancy rate in the capital of Vienna – which has the highest death toll of any Austrian state – is 24 percent, the same as the Austrian average.

Similarly, the occupancy rate was not yet critical in Upper Austria, where it is currently 18 percent.

However, at the current rate, all coronavirus ICU bed allocations would be used up by the start of November- meaning an end to elective surgery in the state.

In Vorarlberg, the situation is more serious. While 43 patients were being treated on Sunday for coronavirus, this rose to 69 on Tuesday.

Similarly, authorities in Tirol are concerned about rising rates of hospitalisation.

Governor Günther Platter (ÖVP) said on Tuesday that the situation was “quite serious”, reports Kurier.

“It is our joint task to do everything in our power to prevent our health system from being overwhelmed,” he said.

The number of coronavirus infected rose from 107 on Friday to 152 on Tuesday, with 18 of them being treated in intensive care.

“We must do all we can to prevent the virus from spreading unchecked, especially in older population groups and among people at risk, so as not to bring our health system to the limit of what is possible,” said infectiologist and director of the Innsbruck University Clinic for Internal Medicine, Günter Weiss.