Wherever you are, help is at hand. The Local has teamed up with the Federal Voting Assistance Program (FVAP), which supports US citizens living abroad to vote absentee.

Hopefully, you’ve already requested your absentee ballot – that's the crucial first step, so do it right now if you haven't already. You still have time – and every state allows you to receive your ballot by email.

Once your ballot arrives, don’t hang on to it! Here are four reasons to return your ballot the moment it arrives in your hands – or your email inbox.

Quick! Find out how to vote absentee as a US citizen abroad while you still have time

1. To make sure your voice is heard

Are you one of the three million Americans abroad who is eligible to vote? Want to be certain your voice will be heard? Then, return your ballot immediately! Turnout among eligible overseas voters was only 6.9 percent in the 2016 US election – and even lower for the 2018 mid-terms.

Maybe you've got lost in the voting process? Don't worry. If you’ve requested a ballot but haven’t received it, ask your election office about its status. Hoping to save yourself some time by voting by email? See the map below or click here to check your options for returning your ballot (or your FWAB – more on that below) in your state – by email, fax or mail. 2. For peace of mind amid the pandemic …

Need or plan to return your ballot by mail? You have even more reason to act immediately.  You can contact your local post office about possible delivery delays due to Covid-19 (more information from FVAP here).

So, what if your state only allows mail-in ballots and you’re worried about delays? FVAP suggests seeing if you can send your ballot by diplomatic pouch from a nearby Embassy or consulate.

You may also want to check the latest list of countries to which the United States Postal Service (USPS) has suspended mail due to the pandemic.

The final recommended vote-by-date from abroad is October 13. But why leave it so long? If you want to feel sure your vote will count, return your ballot now!

3. To get your “I Voted From Abroad” sticker!

Voting absentee doesn’t mean you have to miss out on getting one of those “I Voted” stickers. In fact, as an American abroad who played your part in the democratic process, you can get a special version reading: “I Voted From Abroad”.

You can display it on social media to let your friends and family know you voted. Perhaps your sticker will even motivate others to vote too.

4. Because you have a ready-made back-up plan

Are you running out of time? You can’t always count on everything working out as you expect. But when it comes to voting as an American abroad, you get a ready-made back-up ballot – so even if your requested ballot doesn’t arrive, you can still vote.

It’s called the Federal Write-In Absentee Ballot (FWAB). Use this if your regular ballot doesn’t reach you in good time. A few states may allow you to vote via FWAB even if you haven’t already applied for a regular ballot.

Running out of time to return your ballot? Find out more about voting with the FWAB 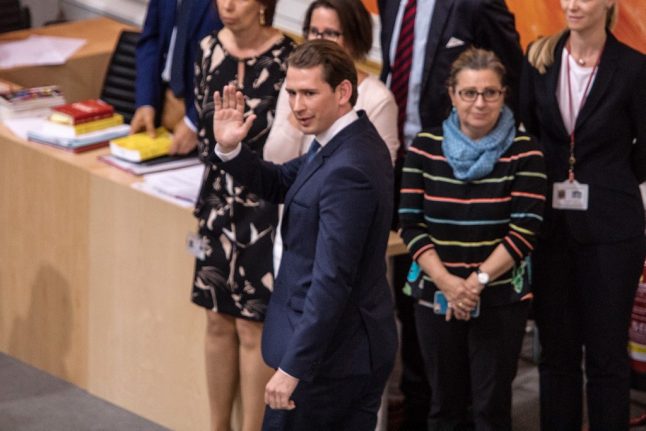 Sebastian Kurz leaves the parliament after he lost a confidence vote on May 27th. Photo: ALEX HALADA / AFP
The snap poll was prompted by the decision of centre-right Chancellor Sebastian Kurz to end his coalition with the far-right Freedom Party (FPOe) after a video emerged last month of FPOe leader Heinz-Christian Strache appearing to offer public contracts in return for campaign help from a fake Russian backer.
While Kurz and President Alexander Van der Bellen favoured a date in early September for the elections, the FPOe and the centre-left Social Democrats (SPOe) pushed for the September 29 date.
Together the FPOe and SPOe have a majority in parliament, which will now have to formally confirm the date.
Kurz comeback?
Both parties lost vote share at May's European elections and have made no secret of their wish for more time to prepare themselves for national elections.
Kurz and his People's Party (OeVP), by contrast, won a thumping victory at the European elections and have a commanding lead in the polls, with one survey last week putting them at 38 percent, compared to just 23 percent for the SPOe and 17 for the FPOe.
If 32-year-old Kurz remains in such a commanding position at the end of the campaign he may be able to form a new coalition with either the liberal NEOS party or the Greens, both on nine percent in the same poll.
Two weeks ago the FPOe and SPOe both voted for a no-confidence motion which saw Kurz's government removed from office. President Alexander Van der Bellen shakes Constitutional Court President Brigitte Bierlein's hand after appointing her as  interim Chancellor during the government's swearing-in ceremony in Vienna on June 3rd. Photo: JOE KLAMAR / AFP
A interim technocratic government under senior judge Brigitte Bierlein then took over.
In a poster campaign launched on Tuesday the OeVP accused the FPOe and SPOe of colluding to bring down the government unnecessarily.
The FPOe for its part has said it is open to the possibility of a new coalition with the OeVP.
Following the explosive revelations in the video published by German media last month, Strache stepped down from his position as vice-chancellor and as head of the FPOe.
However, he received enough so-called “preference votes” in the European elections to take up a place as a member of the European Parliament, though he has so far not announced whether he will do so.
SHOW COMMENTS
Url copied to clipboard!