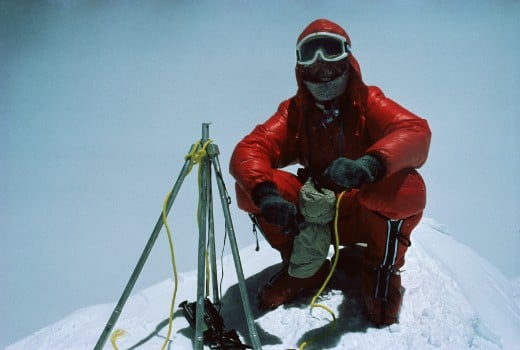 Reinhold Messner on the summit of Everest in 1978. Photo: DPA

On August 20th 1980 Messner reached the summit of the world’s highest peak, 8,848 metres above sea level.

He did it having taken just 60 kilograms of equipment with him – as opposed to the 8 tonnes that were normal at the time – and no oxygen tank. In the process he proved the doctors wrong, who said it was impossible to ascend such heights without assistance.

50 years ago this year he and his brother became the first mountaineers to climb the highest rock face in the world, the Rupal Face on the notoriously treacherous Himalayan peak, Nanga Parbat.

His brother, Günther, never made it back down, while Reinhold lost several toes to frostbite.

While the year is so important to him due to the loss of his brother, he also sees 1970 as being a turning point in mountaineering.

“That year marked a new phase of Himalayan mountaineering,” he says.

Using very little equipment and avoiding elaborate base camps, Messner shaped a completely new style of high-altitude mountaineering in the years that followed.

On Nanga Parbat – his first eight-thousand-metre peak – he laid the foundation stone for the later solo ascent of Mount Everest.

The climb also forced him to move away from rock climbing to mountaineering. He had little choice: with stumps instead of toes he wasn't much use as a climber anymore.

In 1978 he went back to Nanga Parbat, this time alone.

“That showed me that I was psychologically capable of coping by myself,” he recalls. Alone on the mountain, you bear all the responsibility – and you don't have to share your fear, he says. Doctors warned that no one could survive at that altitude without additional oxygen; experienced Alpinists gave the pair little chance of success.

To this day, fellow mountaineers see that Everest ascent as the major breakthrough in mountaineering history.

“It was the last really great adventure on this planet – the great unknown: was it possible?”, says extreme climber Stefan Glowacz. The ascent by Messner and Habeler was a huge step for Alpinism “comparable to the moon landing”.

“Messner has survived adventures that were far ahead of their time. He was a great visionary who still shapes Alpinism today,” says Glowacz.

Messner himself says that the experience with Habeler and alone on Nanga Parbat encouraged him to solo Everest: “I can do it alone,” he remembers thinking.

He makes clear though that an ascent of an 8,000-meter peak is no romantic mountain experience. “It is very exhausting: It is cold; in the upper part you never regain your breath. The cold air drives into your lungs.”

An accident on the ascent

His solo attempt on Everest in 1980 didn't start well.

On the approach to Everest, Messner slid into a crevasse.

Alone and unsecured his chances of escape seemed slim. In the seemingly hopeless situation and darkness of the crevassehe told himself: “If I get out of here, I'll give up.”

He did indeed get out – and continued the climb anyway.

At the top, “infinitely tired”, new worries arose. The monsoon was driving up clouds.

“I was afraid that, if it started snowing, I wouldn't be able to find my way down – I was dependent on my tracks.”

In the huge white void, orientation was impossible. Half running, half sliding, he reached lower altitudes and the fog lifted. “I was really very lucky,” he admits.

After Everest, the South Tyrolean, who is admired by his fans for his daring and reproached by critics for his excessive ambition and egoism, restlessly searched for new frontiers.

Together with Arved Fuchs, he marched 2,800 kilometres across the South Pole without a dog or snowmobile in 1990. Adventure is only adventure when there is risk involved, is his credo.

Which brings us onto the 75-year-old is sharp criticism of what mountaineering on Everest has turned into.

“I am in a dilemma: on the one hand, it is necessary that tourism takes place there, on the other hand, piste climbing ruins the mountain's charisma,” he says.

Messner is now preparing his legacy: with a “Final Expedition” around the world, he wants to pass on his understanding of mountaineering and his appeal for respect for the mountains during a speaking tour.

“I am not the only one who can do it – but I am one of those who survived,” he says.

SEE ALSO: On the frozen mountain trail from Italy to France