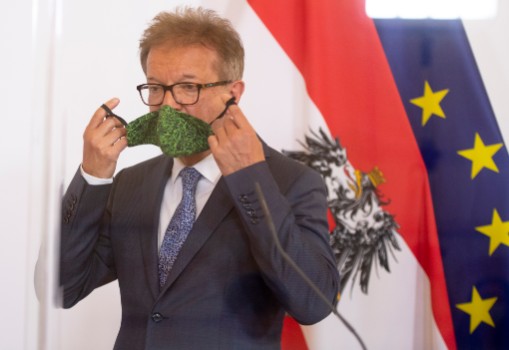 If all goes well, he will consolidate the Green Party's place in the Conservative-led government and prove it is an indispenable ally that can also advance some of its own interests on the environment.

The Green minister has seen his profile rise rapidly during the crisis, even eclipsing the popularity of his boss, conservative Chancellor Sebastian Kurz, according to one recent poll.

But speaking to AFP this week, Anschober — also known by his nickname “Rudi” — said the ratings did not impress him.

“Now comes the difficult… stabilisation phase after the reopening,” the 59-year-old said, adding this was also the “phase of preparation for the autumn, which we see as another major challenge”.

He added virologists in Austria said the infection risk would “massively increase” when people head indoors again once summer is over.

The country of some nine million people, which began easing its strict lockdown in mid-April, has so far seen fewer than 20,000 infections and just over 700 deaths.

Even a recent uptick in cases can be traced to specific clusters, making a widespread undetected transmission unlikely, Anschober said.

But he warned that “risk awareness has markedly decreased in the population,” just as it has in other countries.

He cited the example of Israel, which had been deemed successful in fighting the virus but which has recently seen infections surge.

To avoid such a scenario, Austria is developing a “traffic light” system.

If signals shift to red or orange in a district, certain restrictions could be re-imposed. Decisions will be based on factors such as healthcare capacity and the percentage of positive results during random tests.

Since the beginning of the pandemic, the government has carried out more than 650,000 tests.

This month it also launched a screening programme offering up to 30,000 tests per week for at-risk groups, such as health care workers and undocumented immigrants.

“The goal is simply to look under the carpet, to see that we don't miss anything out,” Anschober said.

Anschober admitted helping steer the country through the pandemic had been “quite a challenge”, including curtailing freedoms normally defended by the Greens, such as those of movement and assembly.

But he said the teamwork within the unlikely government coalition of conservatives and Greens had worked “surprisingly” well, adding: “It seems a crisis binds together.”

Heading four ministries, the Greens have been the junior partner in a government led by Kurz since January. The 33-year-old chancellor's previous coalition with the far-right imploded last May when the far-right leader
became engulfed in a corruption scandal.

Anschober admitted it was “difficult” to stick up for asylum seekers' rights — which Kurz's party opposes. He had managed to defend them as a lawmaker in Upper Austria province under a conservative-Green coalition there.
However, he insisted he is “not someone who leaves his political convictions at the government cloak room”.

Anschober, who recalled how he took three months off from politics in 2012 because of burnout, said he tried to relax now during walks with his dog — and without his mobile — and daily qi gong exercises.

In terms of what could have been done better, Anschober says that “managing a pandemic without mistakes is impossible”.

He said he was “very glad” that a commission was set up to look into what happened in ski resorts, such as in Ischgl in the western province of Tyrol, at the beginning of Austria's outbreak.

Thousands of international holiday makers became infected there around early March, taking the virus back home.
Many of those have filed legal complaints, blaming local authorities for not acting quickly enough — a charge which they deny.