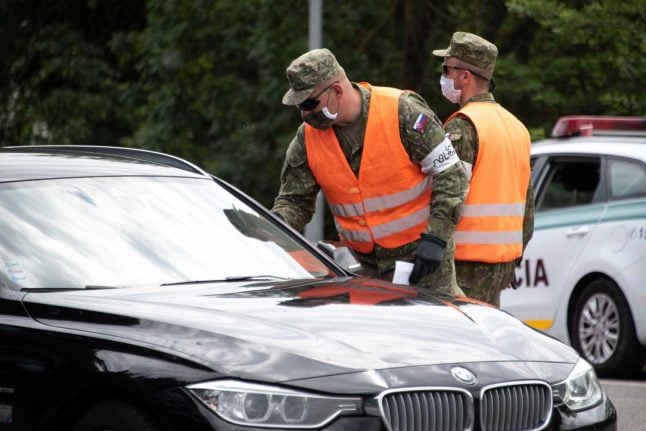 Vienna on Wednesday announced it was lifting the restrictions at its land borders at midnight, except on the Italian frontier. Many European countries have said they will be following suit in the coming weeks and relax travel restrictions imposed at the beginning of the pandemic.

“Since yesterday, the news that Austria has lifted its controls is in all our media,” said a cyclist from Bratislava, surprised that Slovak authorities were stopping him at the Berg border crossing.

A Slovak police officer at the crossing, which is surrounded by fields, said vehicles had been gathering on Thursday for the first time in weeks. But some of those wanting to leave Austria fell foul of rules still in force in Slovakia. Anyone entering the country needs to show they have recently tested negative for the coronavirus or undergo a mandatory two-week quarantine.

The only way to avoid quarantine is to produce a document proving they have spent less than 48 hours outside Slovakia — handy for those who want to nip across to visit family or shop in Austria.

“Too bad! I will come back when it is fully open,” said Lazlo Turkazavo, who lives in Austria and wanted to go to Slovakia but decided to turn around after crossing proved more complicated than he had expected.

As for Slovaks who work in Austria, they are still waiting for trains and buses to resume full service. Some of them could be seen crossing the border on foot, dragging heavy suitcases to load them into taxis on the Austrian side.

For now, some checks at the border are also still being applied by several of Austria's other neighbours.

Only Slovenia and Hungary have announced they will reciprocate the reopening from Friday and let in people travelling from Austria without checks.

Italy for its part has opened its borders for EU citizens, including Austrians. But Austria had not reciprocated, saying the virus was still too prevalent in its hard-hit southern neighbour.

Back at the Berg border crossing, getting the 48-hour pass from Slovak border guards required patience with a long line of cars stretched across the highway.

“All the countries reopen their borders and Slovakia continues this circus, it's ridiculous!”, a motorist told AFP through his car window.

On the Austrian side, a few hundred metres away, the customs building was once again deserted, and the mobile facilities that helped to administer health checks to motorists had disappeared.

This was the case at other entry points into Austria.

“As of midnight there are no longer any (coronavirus-related) controls at the border with Switzerland and Germany,” a Tyrol police official told AFP, noting “a noticeable increase in traffic” from Germany.