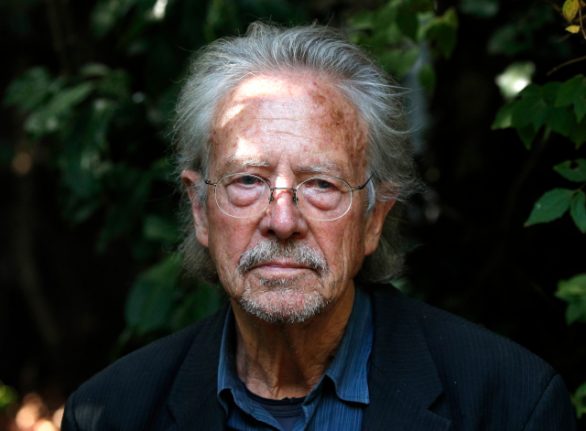 Henrik Petersen said that in the future, Handke would be considered just as worthy as someone like acclaimed Irish novellist Samuel Beckett, who won in 1969.

“In 50 years… Peter Handke, just like Beckett, will be among the most obvious choices the Swedish Academy ever made, of that I am certain,” Petersen wrote in an op-ed in the newspaper Svenska Dagbladet.

The awarding of the Nobel to Handke came under fire in the Balkans and beyond because of his admiration for late Serbian strongman Slobodan Milosevic.

In the 1990s, Handke emerged as a vocal defender of the Serbs during the bloody collapse of the former Yugoslavia, even comparing them to Jews under the Nazis, a remark he later retracted.

Handke also attended the 2006 funeral of Milosevic – who died while on trial for crimes against humanity, and who wanted Handke to testify in his defence.

Petersen – a member of the Nobel Committee which proposes a candidate for the prize who is then approved by the Swedish Academy – described Handke as an advocate for peace and that he was “anti-nationalistic”.

He also said the 76-year-old was “radically unpolitical” in his writing and that his support for the Serbs had been misunderstood, saying Handke's main argument was that the Serbian point of view was missing in German and Austrian media.

The decision to award an author that even had the potential to offend came as a surprise, as the Academy was widely seen as choosing someone who would avoid ruffling any feathers.

The body was shaken by a scandal in 2017 that saw Frenchman Jean-Claude Arnault, who has close ties to the institution, jailed for rape in 2018.

The Academy, which dates back to 1786, was torn apart as its 18 members vehemently disagreed on how to manage their ties to him.

Ultimately, seven members quit the Academy. In tatters, it postponed the 2018 prize until this year – the first delay in 70 years.

Handke was honoured with the 2019 award, with the Academy saying he had established himself as one of the “most influential” post-World War Two writers in Europe.

The 2018 prize was given to Polish writer Olga Tokarczuk.

Academy members rarely make comments on winners, other than the official award statements, but Petersen was one of five external members of the Nobel Committee this year, who were added after demands for outside oversight from the Nobel Foundation which manages the prize money.