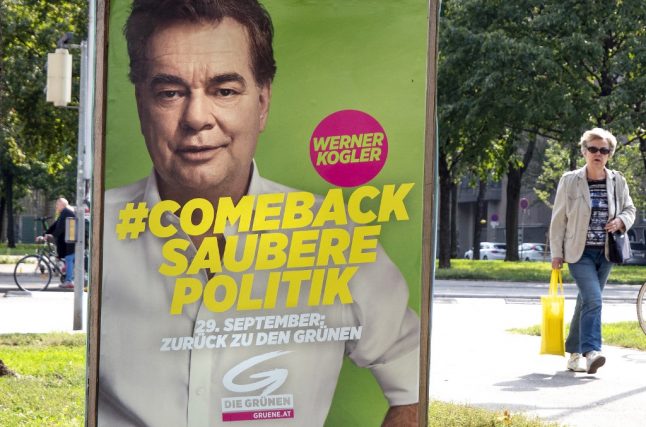 An election poster of Werner Kogler of the Greens party is seen in Vienna, Austria on September 23, 2019

A highway tunnel under a national park?

Environmentalist candidate Lukas Hammer (pictured below second left) dismisses it as a “solution of the past” as he hikes with few dozen supporters on the outskirts of Vienna in one of the Greens' final campaign events ahead of Sunday's national election.

Riding on climate change being the number one voter concern, the Greens hope to reverse shock losses from the last election when they failed to gain the four percent needed to sit in parliament.

This time, they are polling at 11-13 percent, and even have a slight chance of governing if the conservative People's Party (OeVP), which is expected to win most votes, tries to form a coalition with them.

Sebastian Kurz's OeVP ruled in an alliance with the far-right Freedom Party (FPOe) from late 2017 until this May when a corruption scandal brought down the government and led to snap polls. But the situation has. Austria, like other European countries, suffered record summer heat this and last year; the movement “Fridays for Future” stages regular demonstrations throughout the country. Alarming reports also warn of the consequences of climate change for the Alpine nation of 8.8 million people.

“We have exactly the same speech as in 2017,” says Thomas Mueller, a Vienna councillor of the Greens, which was founded in 1986 by activists who had protested the construction of a nuclear power plant and a Danube water power plant.

In opinion polls, voters have placed the climate at the top of their concerns this time in the country known for receding glaciers, cows grazing on mountain pastures and sparkling clean rivers, while in the previous elections in the fall of 2017, migration dominated the debate.

Other parties have jumped on the bandwagon, declaring the fight against climate change a priority, even including the far-right FPOe better known for its leader flying a private plane and, most recently as infrastructure minister, increasing the speed limit on one highway stretch.

Austria is seen as a pioneer in several fields, such as organic farming, which makes up 25 percent of cultivated land — the highest rate in the EU — and renewable energies, which account for 32.6 percent of its consumption, almost double than the EU average. But it falls short in terms of greenhouse gas reduction. Between 1990 and 2017, Austria together with five others were the only EU members who saw their greenhouse gas emissions continue to increase, while in the whole union they have fallen by 22 percent.

Over the same period, in the transportation sector alone these emissions increased by 71 percent in Austria, according to Environment Ministry figures.

“The big black spot is the greenhouse gas emissions from cars and trucks,” says Johannes Wahlmueller, climate expert at the NGO Global 2000.

Many drive in the prosperous country, and many companies operate from its Alpine valleys, where the movement of goods and people is particularly dense.

Surrounded by eight other nations, Austria is also at a transport crossroads in Europe.

Countries with similar standards of living and growth, such as Sweden, have reduced their emissions significantly over the last 20 years, proving, according to climate experts, that Austria has failed to implement its commitments.

The country — whose president Alexander Van der Bellen is a former Greens leader — could even miss some of the 2020 and 2030 targets of the international climate pact.

A coalition between the Greens and Kurz, who has said he opposes the introduction of a carbon tax, would require “a real shift” in the former chancellor's party, Dominic Rein, a “Fridays for Future” activist tells AFP.

Kurz is, according to his entourage, “personally interested” in an alliance with the Greens even if it is recognised that finding common ground will not be easy.

In Vienna, the planned 19-kilometre (12 miles) highway tunnel under part of the Lobau national park to ease traffic flow east of the capital has led to criticism and legal filings to prevent its construction.

According to the Greens, the Lobau, a vast floodplain along the Danube, is “the only example of a national park in the heart of a European capital”.

“We can no longer afford these kinds of projects in the middle of the climate crisis,” Hammer, 36, who is running for a parliament seat tells AFP.

“Building a highway to solve traffic congestion is what was done in the 70s, but we must urgently and completely change that approach.”