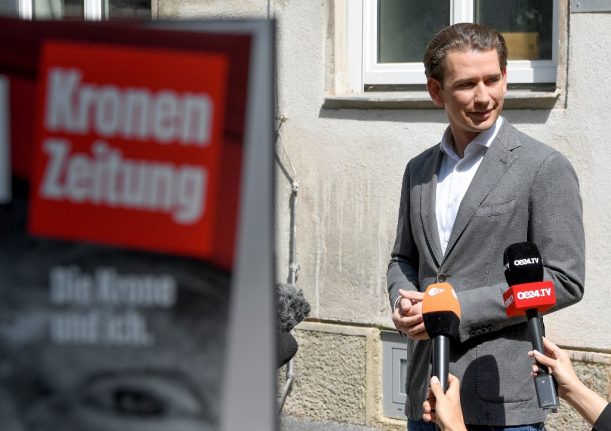 Former Austrian Chancellor Sebastian Kurz addresses the media next to an advertising for the Kronen newspaper. Photo: AFP

With the Freedom Party (FPOe) vying to form a coalition government again after snap polls on September 29, the party founded by former Nazis in the 1950s can hardly afford the ill-will of the tabloid read by a third of adults in the small Alpine country.

“No one can rule without the Krone,” the German daily Sueddeutsche Zeitung wrote recently.

The Sueddeutsche Zeitung, together with German weekly Der Spiegel, broke the “Ibiza-gate” scandal when they published hidden camera footage in May that brought down the government, leading to the fresh elections to be set.

In the recordings, filmed on the Spanish resort island of Ibiza, FPOe leader Heinz-Christian Strache appears to offer contracts to a fake backer in exchange for campaign help.

He also outlines a plan how the woman, who remained off camera but claimed to be the niece of a Russian oligarch, could take control of the Kronen Zeitung.

Strache resigned from his posts as party leader and Austrian vice-chancellor. The remarks also caused an outcry among the central European country's media.

Even though the Krone spreads messages similar to those of the far-right party, including stoking fear of immigrants and mistrust of EU institutions, the paper prides itself on “not being among those that can be bought” with its sole loyalty to its readers.

But how did the newspaper, which celebrated sixty years since its founding this year, become such a tool of power?

“A third of Austrian adults read the Krone every day. Its readership is larger than that of the other five dailies combined,” says political scientist Fritz Plasser, who has conducted several studies on the tabloid.

Even with a declining circulation in recent years, it sells some 700,000 copies in Austria every day, servicing two million readers, out of the country's 8.8 million inhabitants.

Plasser says the Krone “accelerated the rise of populism” in Austria.

“The Krone was the first newspaper to touch emotions… and so connect to its readers,” Plasser tells AFP.

“This influence has rubbed off on politicians who have adopted the emotional strategy to reach the wider public.”

In Austria, the far-right's influence post-World War II started before similar anti-establishments movements found their foothold in other European democracies.

The FPOe — under controversial but charismatic leader Joerg Haider — already governed Austria in a coalition from 2000 until 2002.

“The rise of Joerg Haider and the FPOe since 1986 (when Haider took over the party) is inseparable from the Kronen Zeitung,” Andreas Moelzer, an FPOe leader, said a few years ago.

The Krone also allowed one writer to publish prose with antisemitic hints in its pages. He wrote for the tabloid until 2012.

“Over the years we have written positively about the FPOe… but I also remember a lot of critical articles”, Kronen Zeitung editor-in-chief Klaus Herrmann told the Standard daily in an interview at the end of May after “Ibiza-gate”.

The Krone's political preferences have indeed fluctuated, in line with those of Hans Dichand, who led the tabloid for half a century until his death in 2010 and thought of it as “the people's voice”, which could make and unmake chancellors.

The one constant has remained the paper's anti-immigration rhetoric — the FPOe's main platform — impossible to miss in its screaming headlines and striking photos.

According to media watchdog kobuk.at, 89 percent of alleged sex offenders singled out in newspaper articles in 2017 were foreigners, while they made up only some 40 percent in police statistics at the same time.

In 2018, as in previous years, the newspaper once again committed the highest number of code of ethics breaches, according to the Austrian Press Council.

Its editor has promised the newspaper will be “even more cautious” and “more honest” after “Ibiza-gate”.