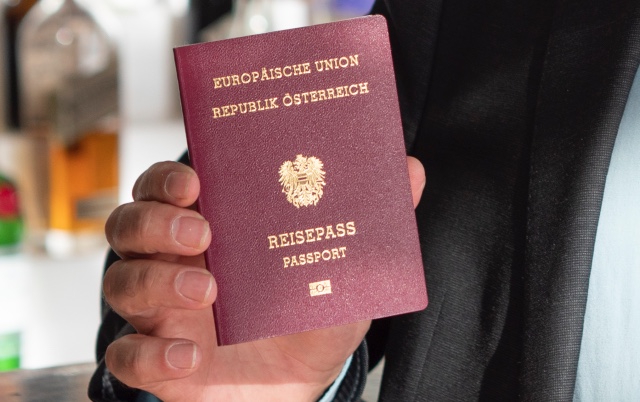 MPs voted by a broad majority for new legislation proposed by Sebastian Kurz's conservative-far-right coalition government before it was deposed in a corruption scandal in May.

Under the new law, the children, grandchildren and great-grandchildren of those who fled the Nazis can apply for citizenship. Until now only Holocaust survivors themselves could obtain Austrian nationality.

Kurz's People's Party (OeVP), which is hoping for another strong mandate in September 29 national elections,  made several diplomatic gestures to Israel in the 18 months it governed together with junior coalition partner, the far-right Freedom Party (FPOe).

The new law applies to descendants of those who were Austrian when they fled, or the nationality of another country under the Austro-Hungarian empire that extended from what is now the Czech Republic to beyond Croatia until 1918.

Under a special regime, Vienna, which does not normally recognised double nationality, will grant passports without the need to reside in Austria or give up a previous nationality.

During the debates on the bill in parliament, Austrian officials said second and third-generation relatives of those who fled had inquired about the proposed changes, and particuarly those with British nationality as Brexit looms.

A Viennese Jewish Community employee said the centre did not have any numbers for how many people might be eligible to apply for Austrian citizenship.

AUSTRIAN CITIZENSHIP
Could Austria change the rules around citizenship?

Austria is one of the many European countries that adopt citizenship rules based on jus sanguinis, meaning that Austrian nationality is passed on by blood, not by territory.

Other countries also accept citizenship based on territory, so a person born in the United States or Brazil, for example, is considered an US or Brazilian citizen.

Both countries also accept “blood citizenship”, so a child born in New York to Austrian parents will be entitled to both citizenships (American and Austrian) based on US law.

It is not the same in Austrian law. The alpine country does not recognise citizenship jus soli, meaning that being born in Austria does not make a person Austrian.

If none of the parents of this child is an Austrian citizen at the time of birth, the child does not obtain Austrian citizenship either. Instead, they will receive whichever nationality their parents hold, following the parent’s country’s rules.

For example, a child of Turkish immigrants that is born in Austria will be Turkish even if their parents have been legally residing in Austria for years and were born here themselves.

One alternative for people born in Austria to receive an Austrian passport is by going through a naturalisation process.

READ ALSO: COMPARE: Which EU countries grant citizenship to the most people?

They will still need to fulfil specific requirements, but many will be easier for children born and raised here. For example, children who have six years of legal and uninterrupted residence in Austria and birth in Austria can already apply for citizenship instead of waiting for 15 or even 30 years of legal residence in some cases.

Many other points, including proof of knowledge of German at level B2 or five years of marriage to an Austrian, will also allow people who have been legally and uninterruptedly living in Austria for six years to apply for citizenship early.

Besides that, children born here have an “easier” path to citizenship in certain requirements. For example, those younger than 14 years old don’t need to submit proof of German language skills.

Kids will likely have less trouble proving they’ve had no problems with the law, administrative violations, and that they are not a threat to Austrian security.

READ ALSO: EXPLAINED: How to get Austrian citizenship or stay permanently in Austria

However, they will need to renounce their previous citizenship. If not possible because of the other country, they will be asked to do so, or to “choose a citizenship”, once they turn 18.

Which children born in Austria are automatically Austrians?

In cases where a child’s parents are not married, and only the father is Austrian, the child acquires citizenship by origin if the Austrian father either acknowledges paternity after eight weeks of the baby’s birth or if the paternity is acknowledged or proven by the court.

In these cases, when the child has parents of different citizenships, Austria allows for dual citizenship.

Whereas in a naturalisation process, the child will need to give up their other passports to become Austrian, if they have an Austrian mother and a British father, for example, they can keep both, according to Austrian law.

What can I do if I want my child to be a dual citizen?

One thing many parents do if they want their child to become Austrian and keep another citizenship is naturalising themselves before the baby is born.

The parent who naturalises Austrian will lose his or her previous citizenship, but the child will then be born to an Austrian and a foreign parent and therefore be entitled to inherit and keep both.

READ ALSO: How can I apply for dual citizenship in Austria?

For example, two American parents living in Austria could have an American-Austrian child if one of them naturalises before the baby’s birth. Provided, of course, they themselves fulfil the criteria for naturalisation.

The child of a Brazilian-Italian father and an Austrian mother, for example, would be entitled to all three passports. They would not need to lose any citizenship – not even when turning 18.

Austria provides for loss of citizenship in just a few cases, though, including when a person voluntarily joins another country’s military service.

READ ALSO: EXPLAINED: Am I eligible for Austrian citizenship?

Austrian citizenship is not easy to get. Besides the difficulty to fulfil criteria, and the need to renounce other citizenships, it is one of the more costly processes in the EU.

That is only for the process itself, which does not include any legal assistance you might procure or the translation and certification of documents.

READ MORE: How much does it cost to become an Austrian citizen?

Follow-up costs, like for the actual passport, are also not included. Don’t worry, though. For this sort of cash, Austria takes credit cards.

READER QUESTIONS
Reader question: Will my children get an Austrian passport if born in Austria?
Url copied to clipboard!