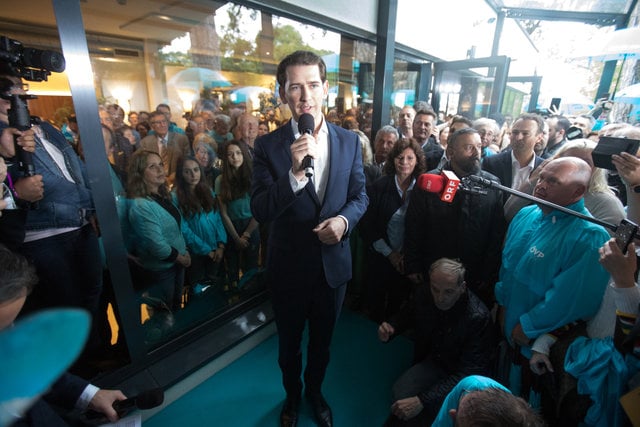 Chancellor Sebastian Kurz will head back on the campaign trail after being ousted from office. Photo: Alex Halada/AFP

The 32-year-old conservative, who already broke records when he emerged as the world's youngest leader in 2017, lost his post on Monday after MPs voted to oust his government in the wake of the so-called “Ibiza-gate” affair.

Hours after the vote, Kurz addressed cheering supporters to portray himself as a figure of stability in what political analyst Thomas Hofer called an “election campaign (launch) with a clear message” ahead of a snap poll expected in September.

The expert said that while the no-confidence motion had been “inconvenient”, it was by no means the end of the road for Kurz.

“He loses his stage as chancellor, but I believe he has already factored that in,” Hofer told AFP.

Kurz has said his priority is to ensure a smooth transfer of power to an interim technocratic government, before hitting the campaign trail in earnest with a spring in his step.

Kurz's People's Party (OeVP) gained 34.6 percent of the vote and two extra seats in Sunday's European Parliament elections – a record for any Austrian party since the country joined the EU.

“I see that as a healthy sign of democracy that if something doesn't work out or no compromise can be found, that voters are called back to the polls again,” she told AFP.

READ ALSO: What you need to know about Austria's 'Ibiza gate'

The scandal's fallout had caused “big excitement” in Austria as a successful no-confidence vote and a technocratic government were unprecedented in its post-war history, she added.

However, Kritzinger also said Kurz would not suffer unduly from being thrown out of office.

While he loses the advantage of being seen on “trips abroad, meetings with other foreign heads of government”, his new role will mean “he can concentrate on the election campaign”, according to Kritzinger.

Sunday's European parliamentary elections also saw the FPÖ fall back from 19.7 percent in 2014 to 17.2 percent as a result of “Ibiza-gate”, while the SPÖ vote flatlined on 23.9 percent.

“The FPÖ will lead an election campaign not to be number one, but to solidify their base, to keep what can be kept,” Hofer said.

The party is “very, very good at political framing” and has wasted no time to portray itself as a “victim” of a grand conspiracy aimed at removing it from power.

For all the political drama of recent days, some observers expect Austria to get a government of a similar complexion once the dust has settled.

The left-leaning Der Standard daily said in a front-page editorial Tuesday that despite the vitriol currently flowing between the FPÖ and the OeVP, the two parties may well find themselves working together again.

The SPÖ has “gone missing,” according to the paper.

“Sebastian Kurz is a very talented politician with a strong penchant for domination. If it seems advantageous, Kurz will try to govern with the FPÖ again after the elections,” the paper said.