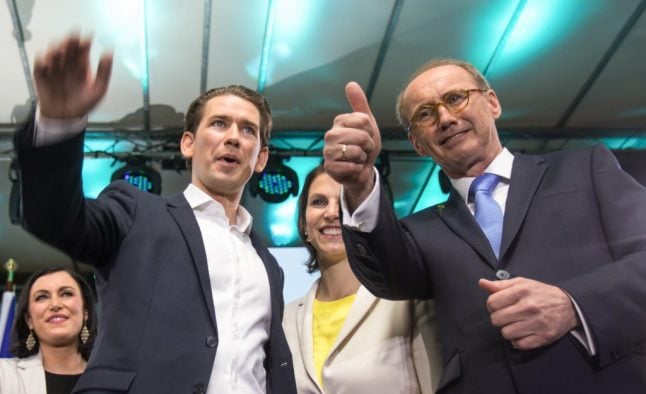 Austria´s Chancellor Sebastian Kurz (OeVP, L) and the top candidate of the Austrian People's Party (OeVP) Othmar Karas (R) cheer after the election for the European Parliament in Vienna on May 26, 201

The predictions, based on surveys carried out by a group of Austrian polling institutes from Tuesday up until Austrians went to the polls on Sunday, gave the OeVP 34.5 percent of the vote, up more than seven points on the last such vote in 2014.

The FPOe was in third place, falling from 19.7 percent to 17.5, while the main opposition Social Democrats were put at 23.5 percent, down half a percentage point on 2014 according to the surveys, which were carried out on behalf of several media outlets.

If the predictions are borne out, the Greens will be down one percentage point on 13.5, and the liberal NEOS party will be on eight percent.

In terms of seat changes in the European parliament, the forecast would see the OeVP on seven, picking up two, while the FPOe and the Greens would lose one each, finishing on three and two respectively.

However, pollsters cautioned that predicting results has been made more difficult by the fact that the vote comes only days after the so-called “Ibiza-gate” corruption scandal engulfed the far-right Freedom Party (FPOe), leading Kurz to dissolve his coalition with the FPOe and call early national elections for the autumn.

The scandal forced party leader and Vice-Chancellor Heinz-Christian Strache to resign after hidden-camera footage emerged of him offering public contracts in return for campaign help from a fake Russian backer.

If confirmed the big win in Sunday's poll will be a fillip for Kurz, who on Monday will face a no-confidence vote that could see him removed as chancellor in the run-up to fresh elections.

The ORF broadcaster reported that turnout was up on the last European parliament elections, and could exceed 50 percent for the first time since 1996.