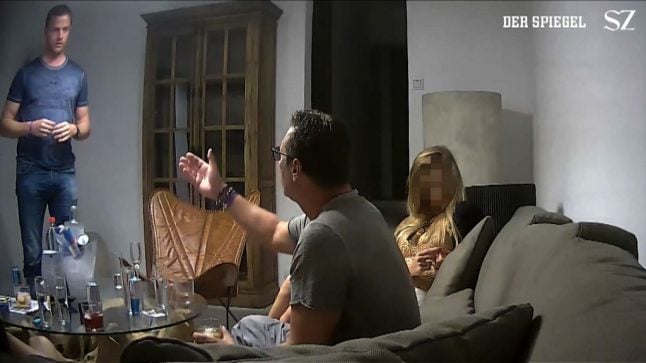 Photo: AFP/SPIEGEL AND SUEDDEUTSCHE ZEITUNG
The video, filmed on the Spanish holiday island of Ibiza in 2017, led to Heinz-Christian Strache's resignation as vice-chancellor on Saturday and a call for new elections after what has been dubbed the “Ibiza-gate” scandal.
In the video published by German media, Strache appeared to offer public contracts during an alcohol-fuelled evening with a woman posing as a relative of a Russian oligarch in return for election campaign help.
“We bring you to Ibiza! Two people fly for two nights to Ibiza, precisely to the villa where Strache was filmed secretly,” read the announcement on oe24, the Internet portal of tabloid Oesterreich.

Those who want to participate can submit their details online and will be informed by telephone if they have won, the announcement said. The trip starts next Tuesday.
Oesterreich and Oe24 secured the booking at the villa, which is available on vacation home platform Airbnb for between 800 to 1,100 euros (US $900 to $1,200) a night.
The “architecturally designed new countryside villa”, eight kilometres (5 miles) from Ibiza city, has four bedrooms, a pool and a “woodland setting garden”, according to the posting on Airbnb.
The scandal rocked the government of conservative Chancellor Sebastian Kurz who has called for elections and ended the coalition with Strache's far-right Freedom Party, which many on Europe's right had held up as a model alliance.