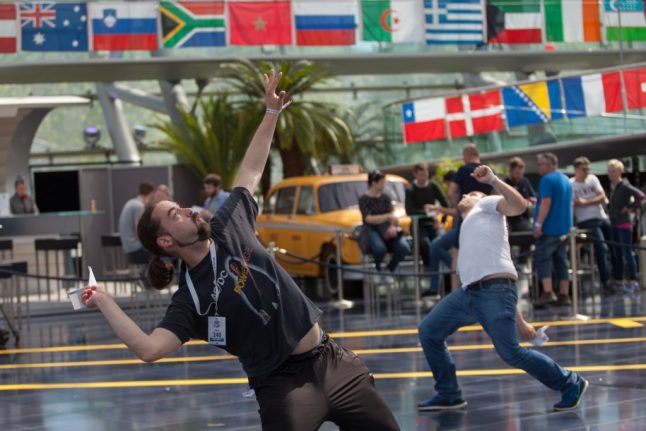 Welcome to the paper plane world championship, which Austria hosts this weekend as the erstwhile pastime of the bored schoolkid morphs into a competitive fest with a world “title” at stake.

Competitors — around 180 people from around the globe — were able to travel ultra lightly to Salzburg with their “kit” composed of simple pieces of standard A4 size paper.

A classic tourist trip to the city would more normally entail a little Mozart or, for the less classically-inclined, a peek at the backdrop to the Sound of Music.

But, for one weekend only, competitors will be out to see who can launch their “fighter aircraft” the furthest or loop the loop most spectacularly or else stay in the air the longest. The winner of each category will take home a world title in a showdown which had its own qualifying tournament spread across 58 countries.

Most participants say they came to the event, organised by Austrian firm Red Bull, just “by chance” or “for fun”.

But once engaged, the competition has really drawn them in, organisers say.

“The level is impressive. Some participants can throw for 50 metres (160 feet),” French competitor Jonathan Miraucourt, 24, told AFP as he prepared to joust in the “long distance” category.

Miraucourt, a student in the southern city of Montpellier but originally from Tahiti, explained he “only” managed 35 metres to qualify.

He said he was pondering even at this late stage whether to change his trusted technique of a small run-up designed to ensure a stable flight.

Participants have varying views on technique, from how to fold the paper just so in order to propel the “jets” skyward.

Amid the atmosphere — more holiday camp than sporting extravaganza — many experienced competitors are happy to pass on tips to those who are relative novices. Ryan Naccarato, from Los Angeles, won the “acrobatic” category in 2012 and wears the calm mien of that successful experience as he prepares for his third event in a competition first held in 2006.

“You have to adapt to the parameters of each event: the quality of the paper, weight, air temperature, humidity,” explains the 29-year-old, a big fan of origami.

That art of paper folding originated in Japan, which is where 54-year-old Emmei Shinichi — the oldest competitor in a mainly male field — comes from.

Counting down to the event, Shinichi was studiously putting the final touches to a complex model he hopes can remain airborne longer than anyone else's.

In the acrobatic category, all designs are allowed as long as the creation comprises nothing more than paper, some glue and a little judicious use of scissors to trim wing or fuselage.

One Indonesian entry consisting of two pieces of paper flapping in concert was arousing early curiosity, as was an Indian man's concept of a paper boomerang that looked to be able to reach impressive speeds.

“For distance, we all make the same type of plane, in the form of a very fine arrow,” explained an Algerian, flexing his arms and shoulders in warm-up exercises to ward off the potential onset of cramps at just the wrong moment.

All planes have to be made onsite in the organisers' Hangar7, home to historical planes and Formula One cars.

The venue has a view of the majestic Alps… as well as Salzburg airport's runways — albeit too far away to have its airspace affected.